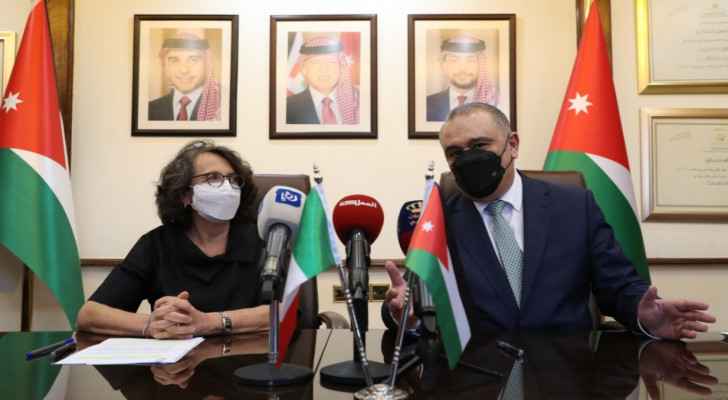 The Jordanian and Italian governments signed, at the headquarters of the Ministry of Planning and International Cooperation, Wednesday, the agreement of the Italian program for development assistance to Jordan for the period of 2021-2023, which was jointly developed during the last period with the aim of strengthening partnership between the two countries.

During these years, the Italian government will provide Jordan with €235 million.

The agreement was signed by the Minister of Planning and International Cooperation, Nasser Shraideh, on behalf of the Jordanian government, while the Italian Deputy Minister of Foreign Affairs and International Cooperation, Mrs. Marina Sereni, who is visiting the Kingdom, signed it in the presence of the Italian ambassador in Amman Fabio Cassese and the delegation accompanying Sereni.

This agreement comes within the framework of the Framework Agreement for Development Cooperation signed between Jordan and Italy in 2018.

The value of the grants within the new Italian aid program agreement amounts to €30 euros, through which development projects will be funded for the local communities hosting Syrian refugees, and the agreement includes arrangements for a public debt exchange of €20 million to finance projects that promote comprehensive and sustainable development.

Shraideh emphasized that the signing of the agreement is an additional step towards strengthening bilateral cooperation between the two friendly countries. He thanked Italy for its continuous support to Jordan, and its support for vital sectors such as water, sanitation, tourism, education, and health sectors.

He praised the Italian government’s stance in support of Jordan in various international forums, and for its support to Jordan in facing the consequences and impacts of the coronavirus pandemic.

Canada reveals amount of aid to Jordan, its position on ....

Canada reveals amount of aid to Jordan, its ....

Canada reveals amount of aid to Jordan, its ....