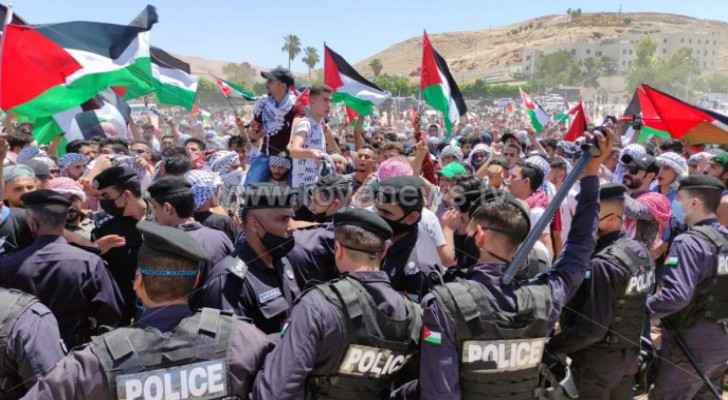 In several regions of Jordan, dozens of Jordanian youth are preparing Friday, a march to the Jordanian-Palestinian borders in support of the Palestinian people, while condemning the Israeli Occupation's acts of aggression.

Many members of the public called for a mass march to the borders to support their Palestinian counterparts.

Jordanians demanded the expulsion of the Israeli Occupation ambassador in Jordan, the withdrawal of the Jordanian ambassador in Tel Aviv, and the cancellation of the gas and Wadi Araba agreements with the Israeli Occupation, stressing the constant Jordanian position on the Palestinian issue and the Kingdom’s complete support of Palestinians in obtaining their just and legitimate rights.

Just under two weeks ago, Palestinians faced forced uprootings from the Sheikh Jarrah neighborhood in occupied Jerusalem, by Israeli Occupation Forces and settlers.

Following Palestinian protests against the illegal aggression, many were arrested.

Notably, more than 70,000 Palestinians performed the Friday Prayer at Al-Aqsa Mosque on the last Friday during Ramadan, amid strict measures imposed by the Israeli Occupation Forces.

They closed roads in the Old City of Jerusalem, preventing residents from entering Al-Aqsa Mosque after the sunset call to prayer.

They also placed military checkpoints and prevented worshippers from entering and breaking their fast at the mosque, or even to pass through.

They used weapons to intimidate them and force them to move away from the area.

In turn, on May 10, the military wing of Hamas, Al-Qassam Brigades launched a missile strike against the Israeli Occupation in occupied Jerusalem, in response to its crimes and aggression against the Holy City and its abuse of the people of Sheikh Jarrah and Al-Aqsa Mosque.

Over the past 12 days, this was followed by Israeli Occupation airstrikes over the Gaza Strip which resulted in the deaths of 232 Palestinians, including 65 children.

Hebrew media did not disclose a concrete number of those killed by Palestinian airstrikes. However, according to Al-Jazeera, that number is 12.