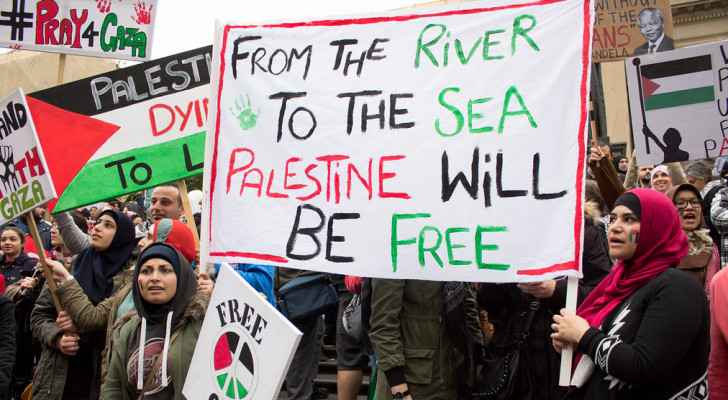 A mass 'from the river to the sea' strike took place Tuesday morning, in the West Bank and the 1948 occupied lands, in support of Jerusalem and the Gaza Strip.

'From the river to the sea, Palestine will be free,' is a decades-old slogan used by Palestinian resistance movements across the world, to raise awareness and condemn the violence, oppression and ethnic cleansing experienced by Palestinians from the Israeli Occupation.

The mass strike included all aspects of commercial and educational life, including private and public institutions. Schools and universities closed their doors, as well as banks and public transport.

The leadership, movements and resistance groups of Palestine called for a comprehensive strike in all the occupied Palestinian territories and in the refugee camps and the diaspora Tuesday.

Monday, the Palestinian National Liberation Movement 'Fatah' had announced the need for a comprehensive strike , in light of the recent Israeli Occupation escalation of violence on the Gaza Strip, and displacement policies in Jerusalem.

Hamas called on the Palestinian people to hold a comprehensive and general strike on in the West Bank, Jerusalem and the occupied territories, to announce the revolutionary warfare, to launch marches towards check points and to close roads to make movement difficult for settlers.

In turn, various popular and mass frameworks, committees, movements, and political and national actors have declared their commitment to the strike decision and to participate in the protest activities, emanating from the Supreme Follow-up Committee.

The Palestinian Council of Ministers decided that public sector employees will participate in the strike as an expression of anger at the Israeli Occupation's aggression on the Gaza Strip and the West Bank, especially the city of Jerusalem, with the exception of the Ministry of Health, local authorities and service institutions that operate under the state of emergency to continue providing their services to citizens.