Three children in Gaza injured every hour: Save the Children

Three children in Gaza injured every hour: Save the Children 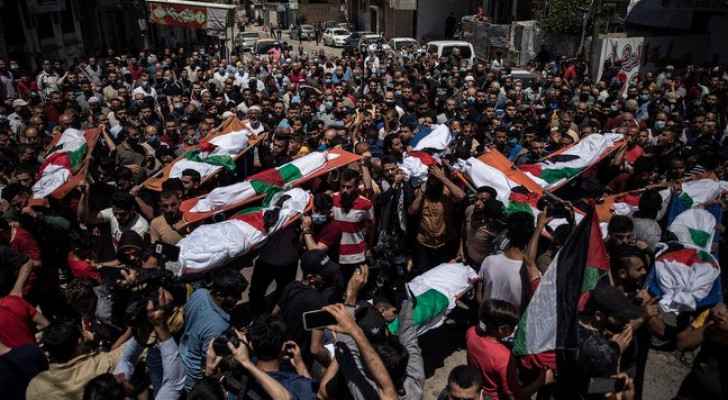 According to Save the Children, three children in the Gaza Strip have been injured every hour since the uptick of violence by the Israeli Occupation on the enclave.

In the last week, the Palestinian health authorities announced that at least 58 children in the Strip, and two in the Israeli Occupation were killed.

“How many more families need to lose loved ones before the international community takes action? Where can children run to when airstrikes rain down on their homes?” said Jason Lee, Save the Children’s Palestine country director.

The latest child deaths join the 3,000 children killed by the Israeli Occupation in the past 20 years.

Here are the identities of the children who were killed by the Israeli Occupation in recent years:

Rashed was from Tubas, occupied West Bank. On May 12, 2021, The young boy was protesting against an Israeli Occupation raid in his city, when he was shot twice in the neck and chest.

Said was from Odula, near Nablus, occupied West Bank. Said just so happened to be present at the entrance of his village during an Israeli Occupation raid on May 6. He was shot twice in the back by soldiers hiding in an olive field.

Atallah was from Zarawat Bani Hassan, southwest Nablus. Atallah was on his way to Nablus on Jan. 29, 2020, and was shot by the Israeli Occupation Forces (IOF) as he passed through the Hares settlement junction. Allegedly, the soldiers claimed he was trying to stab them, but Atallah's family said he was on his way to his father's workshop after completing exams.

Mahmoud was from Zabatiya near Jenin. On Dec. 22, 2020, he was shot by IOF after he allegedly fired at the border police in the Old City, occupied East Jerusalem.

Ali was from Al-Mughayyir, Ramallah. On his birthday on Dec. 4, 2020, the young boy was observing a protest when he got shot in the stomach in his village.

On Oct. 24, 2020, Snobar was helping fix his friend's car which broke down in the middle of the night. He was put in a chokehold by an Israeli Occupation officer. His friend managed to escape. Doctors said he passed away from asphyxiation.

In Aug. 2020, Mohammad and two of his friends were walking down a street used by settlers in the occupied West Bank village of Deir Abu Mishal. Hidden soldiers shot at them, but his friend's managed to escape. The IOF are still in possession of his body.

Zaid, from Al-Fawwar refugee camp was watching a Israeli Occupation raid on May 15, 2020 from the roof. He was shot in the head.

On March 11, 2020, Hamayel was participating in a protest against an Israeli Occupation raid in Beita, near Nablus. He was shot in the head

On Feb 5, 2020, Mohammad was shot several times during a protest in Hebron. According to DCIP, a soldier shot him from a roof some 40 meters away.

On Jan 21, 2020, the trio were simply hanging out by an Israeli Occupation separation wall in a Gaza Strip refugee camp. They were shot by IOF, who still have their bodies in their possession. At the time, the IOF said they spotted "three suspects," who they shot after they allegedly "threw a grenade at them."

However, a police source in Gaza told Reuters that the trio had no affiliation with any armed groups.

On March 20, 2019, the young boy was protesting during the Great March of Return in Khan Younis, Gaza. He was shot in the stomach. After a four hour surgery, Najjar did not survive.

At the end of March 2019, Amara was protesting in Gaza City and was shot in the head. According to Defense for Children International, Amara was most likely shot using an exploding bullet due to the way his face was shattered.

In the Dheisheh refugee camp on March 26, 2019, Mizher was volunteering with medics when an Israeli Occupation raid entered the camp and shot him in the stomach. He was wearing a clearly marked vest indicating he is a volunteer medic.

On March 6, 2019, the young Abu Zaid was playing music and setting off fireworks in the Gaza Strip near a separation wall. He was shot in the forehead by IOF wearing night goggles. Abu Zaid was standing at least 200 meters away from the fence.

In late Feb. 2019, Dayeh was participating in Great March of Return protests in Zeitoun, Gaza. He was shot near his heart for being close to the separation fence, with medical sources stating the bullet exited from his back.

Shalbi was protesting in the Great March of Return south Gaza Feb. 8, 2019, when he was shot in the chest.

In mid-January 2019, Salha from Beit Hanoun was protesting in the Great March of Return and was shot in the head using a tear gas canister. He sustained severe brain damage and died three days after.

...And there are many more.