The latest: developments on Israeli Occupation aggression on Gaza

The latest: developments on Israeli Occupation aggression on Gaza 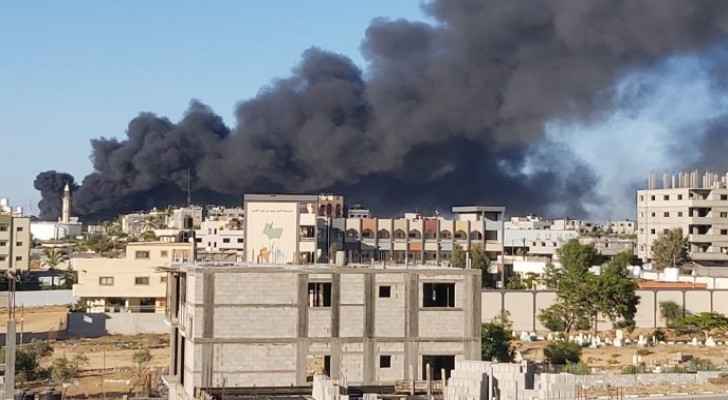 For the seventh consecutive day, the Israeli Occupation Forces (IOF) escalated their aggression against the Gaza Strip.

The Palestinian Ministry of Health said the death toll of Gazans rose to 192, including 58 children and 34 women.

A total of 1,235 were reported injured, with numbers expected to rise.

The Israeli Occupation continued to bombard the enclave by air, sea and land, while the Palestinian resistance responded valiantly, pounding the occupied territories with dozens of missiles.

In its continuous aggression, the Israeli Occupation raids destroyed dozens of residential homes, some of them with the families still inside, which eliminated dozens.

They also targeted the infrastructure in the center of densely populated cities and neighborhoods, and agricultural lands, in addition to targeting government institutions and sites of the resistance factions.

Israeli Occupation warplanes destroyed Anas Bin Malik Building in Al-Yarmouk Street, after targeting it with a number of missiles.

Palestinian medical sources announced the death 12 and 50 injuries as a result of the raids on the Gaza Strip at dawn.

A martyr was pulled out from under the rubble of a house at the scene of the massacre on Al-Wehda Street in Gaza City.

Civil defense crews continued to recover bodies while searching for survivors at the scene of the massacre on Al-Wehda Street in Gaza City.

The Israeli Occupation announced the targeting of the home of Hamas leader Yahya Sinwar and his brother, the leader in Al-Qassam, Mohammad.

A body was pulled out from under the rubble of a house at the scene of the massacre on Al-Wehda Street in Gaza City.

A total of three bodies were pulled out from the rubble of a house at the scene of the massacre on Al-Wehda Street in Gaza City.

A Shifa Medical Complex official announced two deaths and 25 injuries, most of which were children and women, as a result of the series of Israeli Occupation forces targeting citizens' homes in the center of Gaza City.

"We believe that the number is likely to increase due to the extent of the destruction," he said.

Raids were renewed in Khan Yunis.

A follow-up to the bombing and the latest attacks launched by the warplanes in Gaza City:

The targeting of two apartments directly on 10th Street, south of Al-Zaytoun neighborhood, and a number of injuries.

Two homes were directly targetted on Al-Wehda Street, opposite the Shanti bakery in Gaza City, and deaths were reported.

Roads were targetted in the vicinity of the Palestine Stadium and near Palmyra Stadium in the center of Gaza City.

A total of three bodies and dozens of injuries arrived to the Shifa Medical Complex, after the intense Israeli Occupation raids on Gaza.

Israeli Occupation Forces attacked a group of civilians in Jabalia.

A total of four Palestinians were wounded when a Zionist targeted an apartment in Ammar Hassan, 10th Street, south of Gaza City.

Warning sirens sounded in Tel Aviv and other occupied territories, with Hebrew media reporting that 42 rockets fell on the city and its environs.

After the curfew was lifted in Tel Aviv, Al-Qassam Brigades launched a large missile strike with dozens of rockets to Tel Aviv and its suburbs, and concurrently launched a large strikes to occupied Ashdod in response to the bombing of civilian towers and safe houses.

IMAGES: Life returns to the shores of Gaza after 11 days ....

IMAGES: Life returns to the shores of Gaza after ....

IMAGES: Life returns to the shores of Gaza ....

IMAGES: Life returns to the shores of ....