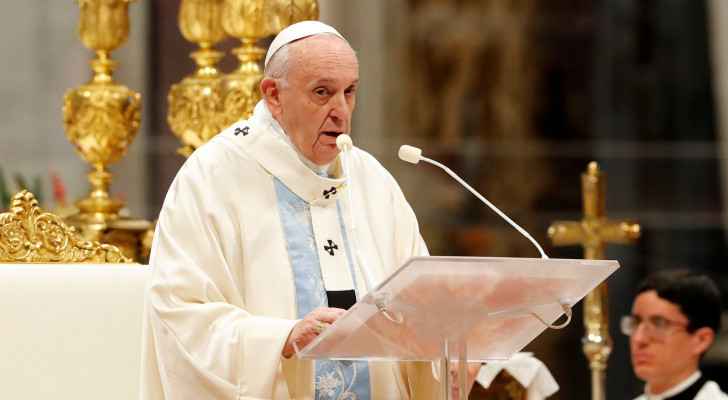 Sunday, Pope Francis called for an end to the confrontations in the city of Occupied Jerusalem, in the wake of new clashes that resulted in more than 90 wounded in the holy city.

"I follow with particular concern the events taking place in Jerusalem," the pontiff said in a message after Sunday prayers.

He added, "I pray that (Jerusalem) will be a place of meeting, not a place of violent clashes, a place of prayer and peace."

He continued, "I invite everyone to search for common solutions, so that the multi-religious and multicultural identity of the Holy City is respected and brotherhood may prevail."

Tensions prevailed Sunday in Occupied East Jerusalem after hundreds of Palestinians were injured since Friday during clashes between Israeli Occupation police and Palestinian demonstrators, which sparked international concern about the potential for the spread of unrest.

The current confrontations in Occupied Jerusalem are the fiercest since 2017, when the Israeli Occupation's positioning of electronic gates in the vicinity of the Al-Aqsa Mosque caused protests and confrontations that ended with the removal of roadblocks.

The Pope also raised his prayers for the victims of the attack on a school in Kabul on Saturday, saying that it was "an inhuman act that affected many young girls while they were leaving school."

"Let us pray for them and their families. May God give peace to Afghanistan," he added.

A series of explosions in front of a school in the Afghan capital killed fifty people, most of them schoolgirls, and injured more than 100 others in the Dasht-Burshi neighborhood, west of Kabul, which is inhabited by the Shiite Hazaras.

Finally, the Argentine Pope spoke about the situation in Colombia at a time when a number of people were waving Colombian flags in Saint Peter's Square.

"I would like to express my concern about the tensions and violent clashes in Colombia, which have resulted in deaths and injuries. Many Colombians are here, let us pray for your homeland," he said.