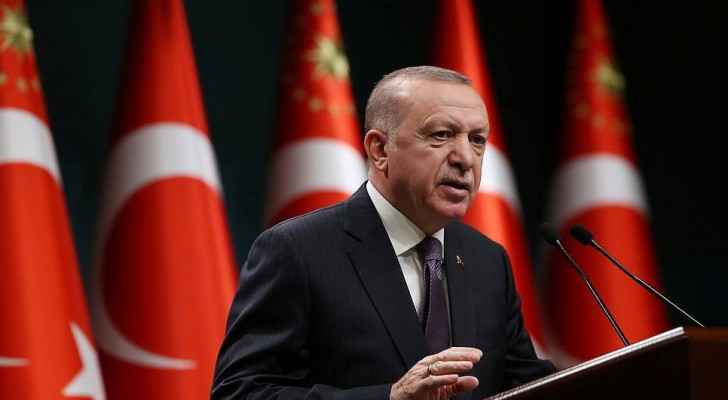 Turkish President Recep Tayyip Erdogan described the Israeli Occupation Saturday evening as a "brutal terrorist" state, in a speech he delivered in Ankara in which he addressed the clashes that took place in the Al-Aqsa Mosque compound on Friday evening, which left more than 200 Palestinians injured.

Erdogan said, "Israel is a brutal terrorist state, which brutally and immorally attacks Muslims in Jerusalem who seek only to protect their homes, their millennial country and their sacred values."

The Turkish president described the acts of violence in Occupied East Jerusalem in general and the Temple Mount in particular as an attack on "all Muslims," stressing that "protecting the honor of Jerusalem is a duty of every Muslim."

Erdogan also called on “all countries, at the forefront of which are Islamic countries,” to “take action against the Israeli attacks on the Palestinians.”

He also called on the UN Security Council to "stop this persecution."

Before making this speech, the Turkish president posted a tweet in Turkish, English, Arabic and Hebrew, condemning the violence that took place in Occupied Jerusalem.

In his tweet, Erdogan said, "We strongly condemn the blatant attacks that Israel is carrying out against our first kiss, Al-Aqsa Mosque every Ramadan, unfortunately."

"We in Turkey will continue to stand by our Palestinian brothers in all cases and circumstances," he added.

For its part, the Turkish Foreign Ministry urged the Israeli Occupation government Friday to "put an end to its hostile and provocative policies."

About 300 people demonstrated Saturday morning in front of the Israeli Occupation consulate in Istanbul to protest the violence in Occupied Jerusalem.

Erdogan previously entered into a verbal altercation with the Hebrew state in 2018 when he described its practices in the Palestinian territories as "crimes against humanity" and "state terrorism."

The Turkish president, who presents himself as a protector of the Palestinian cause, sharply criticized the Israeli Occupation that year, describing it as "the most Zionist, most fascist and racist country in the world."

Relations between Turkey and the Israeli Occupation have been strained since the two countries withdrew their ambassadors in 2018, after a number of demonstrators were killed in the Gaza Strip.

However, last December, the Turkish president expressed his desire for rapprochement with Israel, expressing his hope for "elevating relations to a better level."