Jerusalem is a red line: Foreign Ministers of Jordan, Palestine

Jerusalem is a red line: Foreign Ministers of Jordan, Palestine 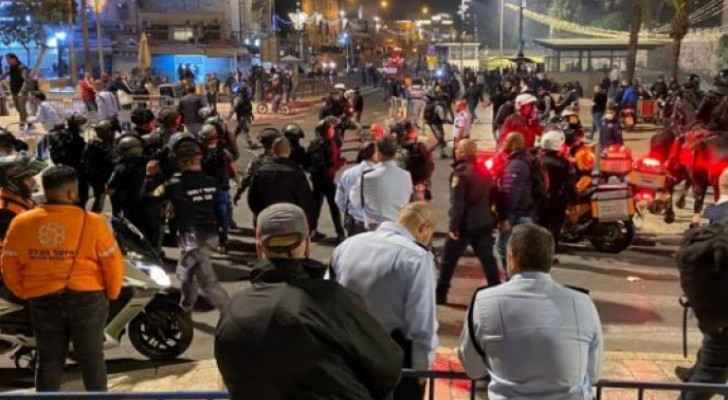 Saturday, the Minister of Foreign Affairs and Expatriates Ayman Safadi and the Palestinian Minister of Foreign Affairs Riyad Al-Maliki stressed the need for the international community to take immediate and effective steps to stop the illegal and inhuman practices of the Israeli occupation against the Palestinians in occupied Jerusalem, particularly in Al-Aqsa Mosque.

The two ministers held the Israeli Occupation authorities responsible for the dangerous escalation in occupied Jerusalem.

Safadi and Maliki stressed that Jerusalem and its sanctities are a red line. They added that the Israeli Occupation's actions are a clear violation of international law, and a crime that will fuel the conflict and push the region towards further escalation.

Safadi affirmed that Jordan, under the guidance of His Majesty King Abdullah II, the custodian of Islamic and Christian holy sites in Jerusalem, will continue to devote all its capabilities to protecting the holy sites, their Arab, Islamic and Christian identity, and the historical and legal status quo in them. It will also continue to confront the Israeli Occupation's attacks and violations.

Safadi and Maliki also stressed the continuation of their joint efforts to protect the rights of Palestinians in Sheikh Jarrah neighborhood to their homes and prevent their eviction.

The two ministers stressed that the Israeli occupation, as the occupying power, bears the responsibility to protect the rights of Palestinians in their homes, warning that evicting Palestinians from the Sheikh Jarrah neighborhood constitutes a war crime and a violation of international humanitarian law, the Geneva Convention and the Hague Convention.

The two ministers discussed preparations for the emergency conference of Arab foreign ministers next week to discuss the situation in Jerusalem. They confirmed that the joint coordination and action will continue regionally and internationally to confront the Israeli Occupation's violations and protect the Palestinian people and their rights. The most important of which is their right to their independent and sovereign state with Occupied Jerusalem as its capital.