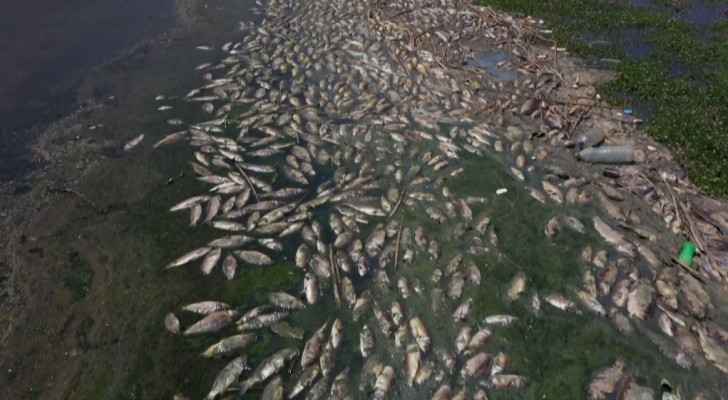 Tonnes of dead fish have washed up on the shore of a highly polluted lake in eastern Lebanon in recent days, according to officials.

It was not immediately clear what caused the dead fish in Lake Qaraoun on the Litani river, which several local fisherman said was unprecedented in scale.

A preliminary report said a virus had killed only carp in the lake, but a veteran water expert said their deaths could also have been caused by pollution.

Hundreds of fish of all sizes lay dead on the banks of the more than five kilometre (three mile) long lake  last Thursday, and the stench of their rotting flesh clung to the air.

Men shovelled carcasses into a wheelbarrow, as a mechanical digger scooped up more into the back of a truck.

"It's our third day here picking up dead fish," said Nassrallah el-Hajj, from the Litani River Authority, dressed in fishing waders, adding they had so far "carried away around 40 tonnes."

On the water's edge, 61-year-old fisherman Mahmoud Afif said it was a "disaster."

"In my life I've never seen anything like it," said the father-of-two.

The Qaraoun lake was built as a reservoir on the Litani river in 1959 to produce hydropower and provide water for irrigation.

But in recent years experts have warned huge quantities of wastewater, industrial waste, and agricultural runoff containing pesticides and fertiliser flooding into it have made it increasingly toxic.

Since 2018 fishing has been forbidden in the reservoir as the fish there was declared unfit for human consumption, though fish from the lake have continued to appear in several markets.

The Litani River Authority and the Society for the Protection of Nature in Lebanon on Friday warned of a "viral epidemic," and called for fishing to be forbidden in the Litani as well as in the lake.

It said the likely disease had only affected carp, while four other types of fish appeared to be unaffected.

Kamal Slim, a water expert who has been taking samples of the lake water for the past 15 years, said pollution could also be the cause.

"Without analysis, we cannot be decisive," said the researcher.

But the lake is also home to cyanobacteria, or blue-green algae, and in warmer months the excess nutrients from pollution have caused the bacteria to erupt into bright green blooms that release toxins.

"Right now there is a cyanobacteria bloom, though less thick than last year," he said, with the blooms harming fish, especially when they are weaker during mating and spawning seasons.

"Another possibility is very toxic ammonium," he said.

In July 2016, Lebanese media reported that tonnes of fish floated to the surface overnight in Qaraoun.

Slim said at the time it was due to a toxic bloom.

Lebanon's economic crisis among the most severe in the ....

Lebanon's economic crisis among the most severe ....

Lebanon's economic crisis among the most severe ....

Lebanon's economic crisis among the ....