His Majesty meets with presidents of European Council, European Commission

His Majesty meets with presidents of European Council, European Commission 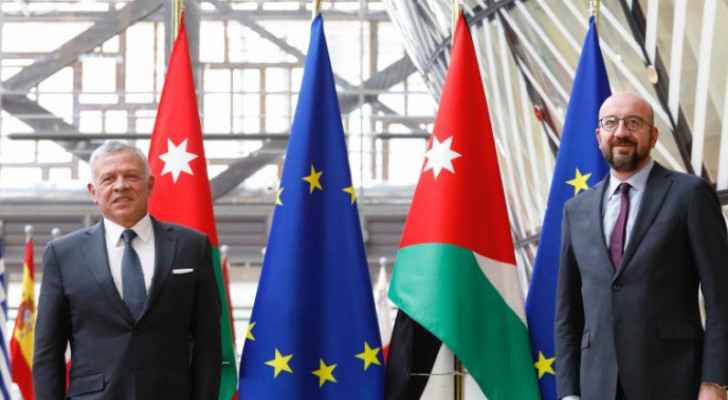 During the two meetings, His Majesty expressed his appreciation for the support provided by the EU to Jordan in various fields, stressing the importance of fair distribution of coronavirus vaccines, in a manner that preserves the health and safety of all.

In turn, Michel praised Jordan's efforts in addressing the pandemic and its keenness to include refugees in the vaccination campaign against the virus, stressing the EU's readiness to strengthen cooperation with the Kingdom in dealing with the pandemic.

Additionally, von der Leyen affirmed that His Majesty is one of the most important partners of the EU, praising His Majesty's diplomatic efforts to enhance communication and understanding between peoples.

She added that Jordan is a key pillar for regional stability, saying, "You can always count on us."

His Majesty stressed the need to end the Palestinian-Israeli Occupation conflict on the basis of the two-state solution, leading to the establishment of an independent Palestinian state on the lines of June 4, 1967, with East Jerusalem as its capital.

Earlier Wednesday, His Majesty met with the NATO Secretery General, Jens Stoltenberg, to discuss the cooperation and strategic partnership between Jordan and NATO in the military, training and security fields, combating terrorism and ways to further develop, in addition to regional and international developments.

Also Read: 'The future will bear the best for Jordan's relationship with NATO': King Abdullah II

His Majesty meets with NATO's Secretary General to discuss ....

His Majesty meets with NATO's Secretary ....