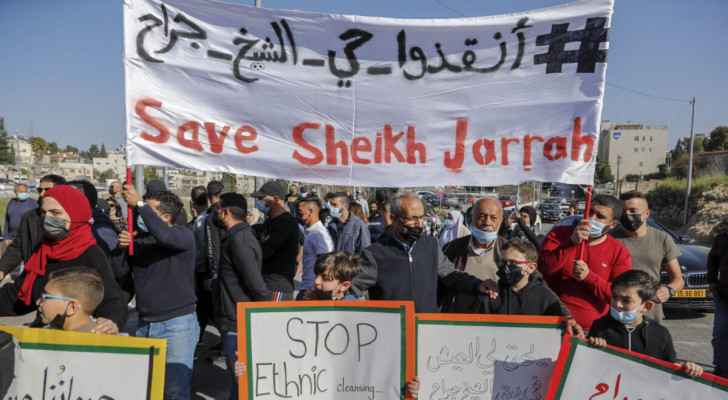 Israeli Occupation police and border guards arrived after a demonstration in solidarity with residents of the neighborhood.

Police said, "Dozens of demonstrators gathered in an illegal protest, and protesters threw stones and bottles at security forces and stopped traffic."

The police added that they had given the protesters a "reasonable time" to leave the scene before dispersing them.
Residents of the neighborhood said, "The police are spraying gas that reaches inside the homes and infects children, and these scenes have been repeated for more than ten days. The police are protecting the settlers who provoke the residents."

"We treated 10 injuries during confrontations with the occupation forces in the Sheikh Jarrah neighborhood in Jerusalem, and three of them were taken to the hospital," the Palestinian Red Crescent ambulance said.

The Sheikh Jarrah neighborhood is located in occupied East Jerusalem, which was subject to Jordanian sovereignty like all other West Bank cities before the Israeli Occupation occupied it in 1967 and annexed it in a move not recognized by the international community.

Jewish settlers, with the support of the courts, seize homes in Sheikh Jarrah, claiming that Jewish families lived there and fled in the 1948 war when the state of Israel was established. However, the Israeli Occupation does not return property and homes to Palestinians who have lost them and which are inhabited by Jews.

The property-claiming Jewish associations are currently seeking the homes of 58 other Palestinians, according to Peace Now. The Israeli Occupation Supreme Court is scheduled to announce its ruling in the complaints filed by four Palestinian families on Thursday.

Jordan built housing in Sheikh Jarrah neighborhood to house the Palestinians who were displaced in 1948 and has lease contracts to prove this.

A spokesperson for the Jordanian Foreign Ministry, Dhaifallah Al-Fayez, said that "there have been continuous attempts by Israel to evict these Palestinians from their homes."

Opponents of the evictions gather regularly every Friday in the Sheikh Jarrah neighborhood to protest, including the Israeli Jewish representative Ofer Kasiev, who was photographed last month being beaten by the police.

Sheikh Jarrah is located steps away from Bab al-Amud, the main entrance to the Old City, where violent confrontations took place recently when settlers chanted “Death to Arabs,” in a march through the city.

Five arrested in Sheikh Jarrah as ....