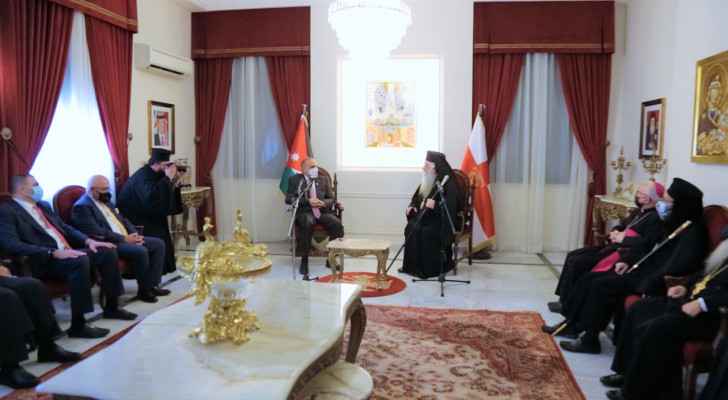 During a meeting with Greek Orthodox Archbishop Christophoros Atallah along with other church heads and representatives, Khasawneh said all Jordanians live in "harmony, solidarity and brotherhood that binds us all, both Muslims and Christians, under the leadership of His Majesty King Abdullah II and His Royal Highness Crown Prince al-Hussein."

He added that "We are all partners in this country, celebrating religious holidays together and exchanging greetings on these cherished occasions."

Khasawneh said King Abdullah II, the custodian of the Islamic and Christian holy sites in Jerusalem, lives up to the responsibility of preserving the identity and status of the holy city of Jerusalem and protecting its people.

He pointed out that Jordan will stand against all attempts to change the historical status quo in Jerusalem by all political and legal means. He added that the Kingdom does not tolerate any attempts to discriminate between "the members of one society."

Archbishop Atallah spoke about the Muslim-Christian coexistence in Jordan, saying it has been existing for 1,400 years, reaffirming the Christians' pride in King Abdullah II’s custodianship of the Jerusalem holy places.

He also commended the government's measures to combat the coronavirus pandemic and provide a safe environment for citizens and residents to worship and pray.