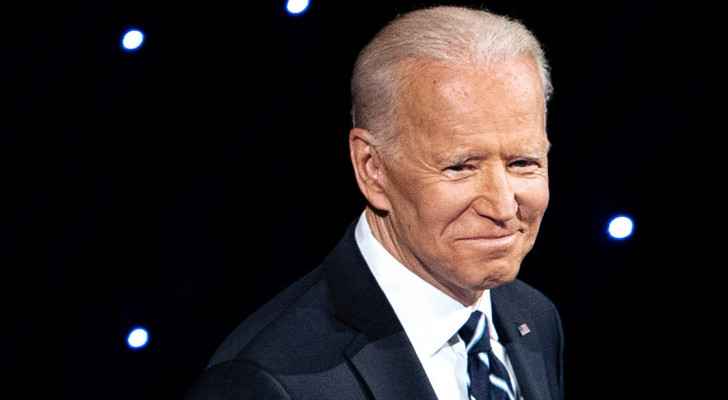 US President Joe Biden announced Wednesday, in his first official Address to Congress, that American is ‘moving forward again’ after several massive crises.

On the eve of the 100th day of his presidency, Biden said, "In a hundred days, I can tell the country: America is moving forward again."

"America is ready to go. We work again, dream again, discover a new time, lead the world again. We have shown to each other and to the world there is no surrender in America."

He stressed that this national effort must now focus on rebuilding the economy and fighting inequality through "the largest action plan since World War II."

The US President called for an increase in tax contributions to companies and wealthier Americans in order to fund his plan to help families.

"It is time for American companies and the richest 1 percent of Americans to start paying their fair share," he said in his annual address to Congress.

Although the presidential speech on the Capitol constitutes a well-established tradition in American political life, Biden’s speech this year takes place in an exceptional atmosphere necessitated by the health crisis.

Biden considered that the vaccination plan against Covid-19 in the United States is "one of the greatest logistical successes" in the country's history.

He said that "more than half of adults have received at least one dose" and that "deaths among the elderly have decreased by 80 percent since January."

He added cautiously, "there is still work to be done to overcome the virus."

More than 96 million people, representing about 30 percent of the population, received the two doses of the vaccine. In a highly symbolic decision, health authorities announced Tuesday that the immunized Americans no longer need to wear masks outside except in crowded places.

The US President called on the Senate to pass a major police reform bill named after African American George Floyd.

Wednesday, the US President affirmed that he would not "seek a conflict with China", but at the same time he expressed "readiness to defend US interests in all fields."

He said, “During my discussions with President Xi (Jinping), I told him that we support competition,” but in return, “We will fight unfair trade practices.”

“We will maintain a strong military presence in the Indo-Pacific region,” and “We will not abandon the defense of human rights.”

Biden also stressed that he is not seeking to escalate tensions with his Russian counterpart, Vladimir Putin, after he imposed sanctions on Moscow due to a range of concerns.

"I made it clear to Putin that we are not seeking escalation, but their actions have consequences," he told Congress.

Vaccinated Americans to be able to travel to EU: von der ....

Vaccinated Americans to be able to travel to EU: ....

Vaccinated Americans to be able to travel to ....

Vaccinated Americans to be able to ....