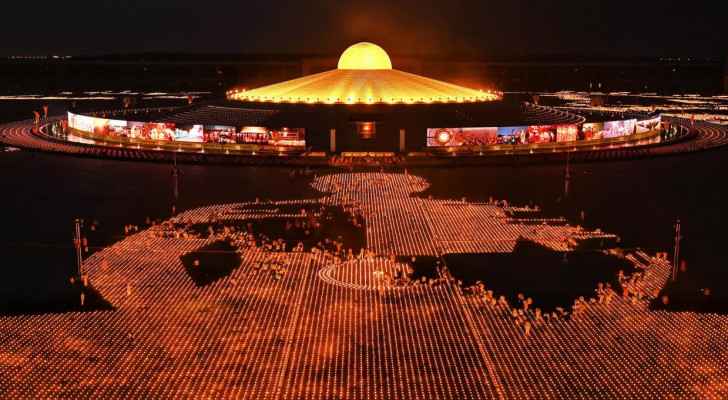 Thursday, in commemoration of 'Earth Day', Buddhist monks chanted around a golden shrine, as a controversial Thai sect burned 330,000 candles attempting a Guinness World Record for the largest flaming image on Thursday.

The candles were designed into the shape of a world map and a Buddha figure, and were arranged around the central shrine at the Dhammakaya sect's 78-acre compound, north of Bangkok.

"Cleanse the mind, cleanse the world" was also spelled out in the flickering light, and organizers said the objective was "to encourage people of any nationality, race and religion to join together in the activities of chanting and group meditation, sharing loving kindness."

The ceremony coincided with Earth Day, a global event aimed to boost awareness about ecological issues - raising questions about whether the burning of so many candles was in itself bad for the environment.

"We will have to see what kind of products these candles are made from. Some substances are not harmful, while others could contribute to air pollution," Thai environmental health expert, Suwimon Kanchanasuta from Mahidol University told AFP.

Devotees who spoke to AFP reporters said they had made the candles themselves, and that no "dangerous materials" were used.

"We only lighted it for a brief moment and our one-hour good intention will be felt by the people all over the world," Juntira Komasatit, a 47-year-old Dhammakaya follower, said.

IQAir, a Swiss-based air quality technology firm, notes most candles are made from paraffin, a byproduct of patroleum.

It was not immediately clear whether the world record was achieved.

The Dhammakaya sect is a wealthy Buddhist order founded in 1970. The sect was steered to riches by the septuagenarian monk Phra Dhammachayo.

From unorthodox animated Buddhist teachings to alleged ties with former premier, Thaksin Shinawatra, the Dhammakaya temple's reputation has been riddled with controversies.

In 2017, Phra Dhammachayo was the subject of a massive police hunt at the Dhammakaya temple complex, with officers uncovering secret tunnels as they sought his arrest over allegations of money laundering and a massive embezzlement of $33 million.

The former abbott remains at large.

Buddhist authorities have accused Dhammakaya of peddling a 'pay-your-way to nirvana philosophy', spreading the sect's popularity through public relations events.

The temple denies the allegations and says the charges are politically motivated.

It has since quietly rebounded and continues to hold several high-profile annual events.

US working ‘intensely’ to end violence between Israeli ....

US working ‘intensely’ to end violence between ....

US working ‘intensely’ to end violence between ....

US working ‘intensely’ to end violence ....