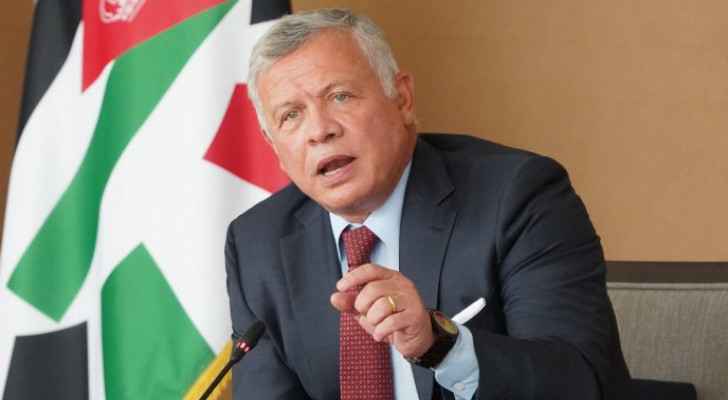 King Abdullah II, accompanied by HRH Crown Prince Al-Hussein, met with figures from a number of governorates Thursday at Al-Husseiniya Palace to discuss the sedition case.

In response to a request to forgive some sedition case detainees, His Majesty said,"In this holy month when we all wish to be with family, I ask officials to look into the proper mechanism to have those who were misled into following the sedition, return to their families soon."

This came in His Majesty's response to the appeal of a number of personalities from several governorates to forgive their children who were misled into this sedition case. The personalities submitted a petition to His Majesty signed by tribes, recalling the Hashemite values of tolerance and forgiveness.

His Majesty had begun his speech on the issue of the sedition case, saying: “What happened was painful, not because there was a direct danger to the country, for the sedition as discussed, was stopped, but if it was not stopped from the beginning, it would have taken the country in difficult directions, God forbid. From the beginning, I decided to deal with the issue calmly," adding that was aware of the events and how things got out of context.

His Majesty added that what happened was painful, however, Jordan is strong in the presence of its citizens, and his confidence in Jordanian institutions has no limits.

His Majesty continued, "My duty, my goal, and the trust that I carry is to serve and protect our people and our country, and this is the basis that has defined and still defines our dealings with everything."

In regards to the development of the performance of institutions, His Majesty stressed, "There is much work ahead of us, our people are facing difficult circumstances, and the priority is to develop the performance of our institutions, and to serve our dear people and achieve their ambitions," stressing the need to focus on how to get rid of the pandemic, in pursuit of a safe summer , which will enable Jordan to reopen sectors in a way that relieves citizens.

His Majesty pointed to the continuous efforts to provide COVID-19 vaccines, and the possibility of giving priority to groups such as teachers, "so that children can return to their schools and universities."

Under direction of His Majesty, prosecution releases 16 ....

Under direction of His Majesty, ....