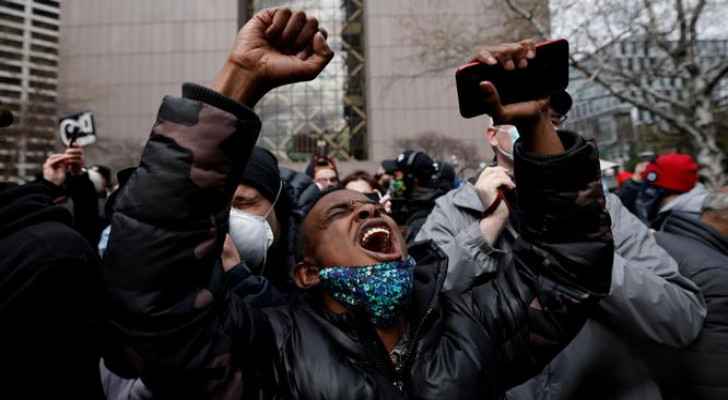 A US court Tuesday found former cop Derek Chauvin guilty in the murder of George Floyd, in a case that has rocked the United States for a year and exposed deep ethnic divisions in the country.

It took a mixed jury of seven women and five men in Minneapolis less than two days after the end of the three-week trial sessions to reach a unanimous decision that the white policeman was guilty of all three charges.

US President Joe Biden expressed to George Floyd's family in a phone call Tuesday that he was "satisfied" with the ruling, saying during the call, which the family shared in Minneapolis, on social media, that it is "very important."

Biden is due to make official statements on Tuesday about the ruling, and during the call he pledged to bring the Floyd family on Air Force One to visit the White House.

Floyd's family attorney hailed the ruling as a historic victory for civil rights and could be a pillar of legislation that includes reforms to the police, especially in its dealings with minorities.

"The justice we agonized to achieve finally got the Floyd family. This ruling is a turning point in history and sends a clear message about the need for law enforcement agencies to be held accountable," Crump wrote on Twitter.

"Justice for blacks in America is justice for all Americans," he added.

In a video on May 25, 2020, Chauvin was seen perched on Floyd's neck for more than nine minutes, while the 46-year-old man lay on his stomach in the street saying, "I can't breathe."

The recording, which has been repeatedly shown to the jury during the three-week-long Chauvin trial, sparked protests around the world against the lack of racial justice and police brutality.

Chauvin, who worked for 19 years in the Minneapolis police, faces a maximum sentence of 40 years in prison for the most serious of the three charges he was convicted of, which is second-degree murder.

Conviction on any of the charges of premeditated, second- or third-degree murder requires a unanimous jury decision.

Three other former police officers who watched Chauvin murder Floyd are facing charges as well, and they will be tried separately later this year.

Pulitzer board recognizes 18-year-old who filmed ....

Pulitzer board recognizes 18-year-old who ....

Derek Chauvin will not testify in George Floyd murder ....

Derek Chauvin will not testify in ....

Protests erupt in Minneapolis after ....