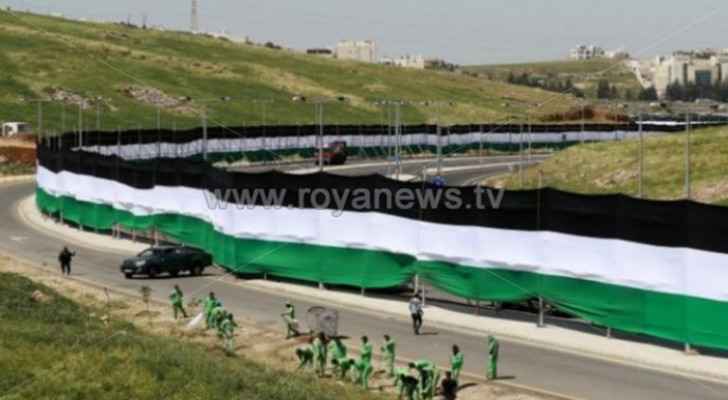 Sunday, the Greater Amman Municipality (GAM) clarified details behind why the Guinness Book of World Records refused to include Jordan's flag as the 'tallest flag' in the world.

The media spokesperson of GAM, Nasser Al-Rahmani, told Roya that the book instead adopted the Jordanian flag as the "largest banner suspended."

With regard to the cost of flag, Rahmaneh emphasized that it was not at the expense of the GAM, indicating that it was sponsored by a large Jordanian company.

According to the Guinness Book of World Records website, the flag, which they called the "largest banner suspended", measures at 12,575.64 m².

It was prepared by the GAM to emphasize the importance and symbolism of the Jordanian flag during their participation in the celebrations of the Kingdom's centenary (April 16) through the "Our Flag is High" campaign.

"The Greater Amman Municipality has prepared to celebrate the National Flag Day of the Hashemite kingdom of Jordan, which falls on April 16th, by attempting a Guinness World Records title for the largest banner suspended, which embodies the Jordanian flag. The flag is suspended from the light poles across Abdoun area, in Amman," stated the Guinness Book of World Records website.

Once the flag is removed, it will be transferred to an exhibition facility belonging to GAM.