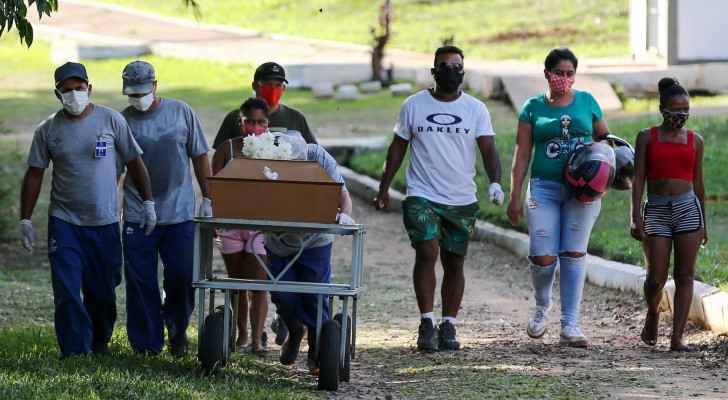 More than three million people in the world have died from COVID-19 since the emergence of the coronavirus in late 2019, according to a census prepared by Agence France-Presse on Saturday, as the race for vaccination continues.

Coronavirus has caused the death of 3,000,955 people, meaning it is the third-most deadly viral outbreak in the 20th and 21st century, behind only the Spanish fly and HIV.

After a slight slowdown in March, the number of daily deaths has recently increased again, with more than 12,000 deaths per day last week, close to the rate of 14,500 daily deaths recorded at the end of January, at the height of the pandemic.

More than 139 million infections have been recorded since the start of the pandemic, including about 730,000 a day now, a number that has also continued to rise since late February.

On Friday, more than 829,000 new infections were recorded in the world within 24 hours, a record number.

In Brazil, one of the worst affected countries, nearly 3,000 deaths are reported every day. This number has increased considerably since mid-February.

The death toll is also rising rapidly in India, which is facing a violent third wave. The country of 1.3 billion people is recording more than 1,000 daily deaths, nine times more than it did at the beginning of March.

India, which is making efforts to vaccinate its population, faces several obstacles in doing so, including declining vaccine stocks according to local media, and has given out only 117 million doses so far.

Vaccination campaigns, which are currently the main weapon to combat the spread of the pandemic, are suffering from setbacks due to the Johnson & Johnson and AstraZeneca vaccines, which have been halted in several countries due to blood clot concerns.

Vaccine campaigns are also facing setbacks due to mutant versions of COVID-19.

Chile, one of the most accomplished countries in the world in terms of vaccination, published a study showing that the Chinese Coronavac vaccine proved to be 67 percent effective in preventing symptoms of Covid-19 and 80 percent in avoiding the risk of death.

In Thailand, where the pandemic is spreading strongly, new restrictions will be imposed from Sunday, especially preventing the sale of alcoholic drinks in restaurants and bars in Bangkok, the epicenter of the third wave of the pandemic.

Authorities also imposed restrictions on movement between regions before the celebrations of the Thai New Year, Songkran, this week, a period that usually witnesses heavy movements due to the holidays.

In Europe, there is a hesitation between imposing additional restrictions to curb the spread of the epidemic by limiting human contact, and easing restrictions to support the economy and calm waves of discontent among the population.

On Saturday, Spain extended quarantine restrictions from travelers from 12 countries, namely Brazil, Peru, Colombia and nine African countries, due to fears related to the mutated versions of the virus.

In other countries, restrictions are easing.

Denmark will speed up the reopening from April 21, and audiences will be allowed in sports stadiums and customers in restaurants.

Italy is supposed to begin reopening restaurants and schools from Monday April 26.

In France, the government spokesman confirmed that "starting around mid-May, we will be able to start reopening," noting that this means "some outdoor courtyards and some cultural centers."

The government is taking cautious steps, in the face of a pandemic that has caused the death of 100,000 people in the country.

In Brazil, the state government of São Paulo announced Friday it will reopen stores and allow religious rites to be held from Sunday, although the daily death toll from COVID-19 remains high across the country.

Passenger fury after Royal Jordanian flight is delayed for ....