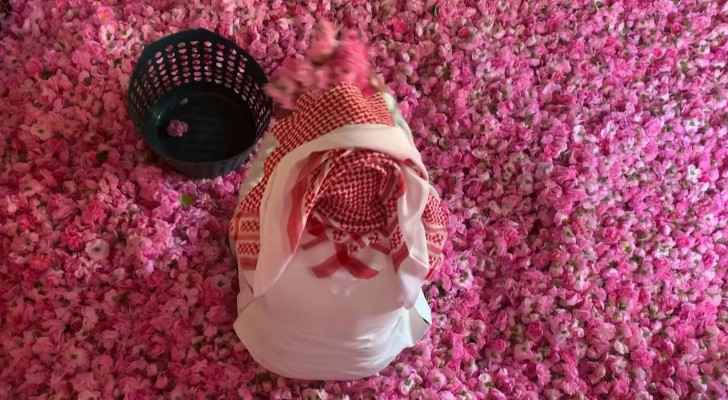 Every spring, roses bloom in the Saudi Arabian western city of Taif, transforming pockets of the kingdom's vast desert landscape into fragrant pink patches. During April, they produce an essential oil that is used to cleanse the outer walls of the sacred Kaaba, which is a building at the center of  Masjid al-Haram in Mecca and towards which Muslims pray.

Owner of Bin Salman Farm Khalaf al-Tuweiri said "In both my farms, I have around 17,000 rose shrubs. The production of each plant varies each year. But on average, a season like last year's produces around 4 million roses."

He added that "Since the presence of this plant in Taif, they (the committee of the Holy Mosque) took a small portion of it to the Kaaba and later started ordering large quantities (of rose oil perfume) to scent the Kaaba and spray and wash it regularly."

He explained the process saying "After the roses are picked, they will be brought here to the factory for weighing, which depends on the quantity picked per day. After that, we start pouring the quantity of roses needed to fill the pot. We're talking about an average of 18,000 to 20,000 roses."

He continues saying "We start boiling (roses) on high heat until they are almost evaporated, and this takes around 30 to 35 minutes. After that we lower the heat for around 15 to 30 minutes until the distilling process starts, which lasts for eight hours."

Lastly, he noted that "Rose oil takes between 15 to 30 minutes until it clears up and floats on top of the jar containers, then we start extracting it into special bottles. "

Thursday to be first day of Eid Al-Fitr in Jordan: Grand ....

Thursday to be first day of Eid Al-Fitr ....