US Secretary of State promises 'lasting partnership' with Afghanistan 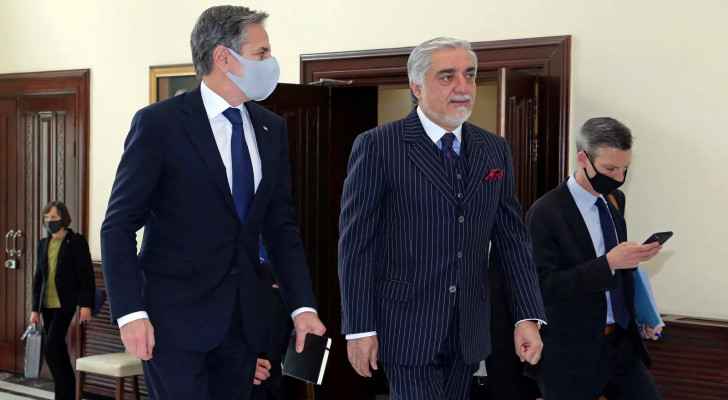 Thursday, US Secretary of State Anthony Blinken promised during a surprise visit to Afghanistan to maintain a "lasting partnership" with the country after the withdrawal of US forces by Sept. 11, the twentieth anniversary of the 2001 attacks.

This withdrawal will take place a few months after the May 1 deadline specified in the agreement between the administration of former US President Donald Trump and the Taliban in February of 2020 in Doha.

Blinken met Afghan President Ashraf Ghani as well as US officials based in Afghanistan to discuss with them President Joe Biden’s announcement Wednesday that the time has come to “put an end to the longest war fought by the United States” in its history, which began after the attacks of September 11, 2001.

"I want to demonstrate through my visit the continued commitment of the United States towards the Islamic Republic of Afghanistan and its people," Blinken said at the end of his meeting with President Ghani, adding that "the partnership changes, but the partnership is permanent."

Blinken also promised that the United States "will maintain its diplomatic and humanitarian support for Afghanistan as well as its security and defense forces" and "continue its efforts to facilitate the Afghan peace process," according to a statement issued by the Afghan presidential palace.

The withdrawal of the 2,500 American soldiers still in the country will begin on May 1, coinciding with the withdrawal of NATO forces. In total, NATO's "Resolute Support" mission includes 9,600 military personnel from 36 countries.

Many analysts believe that this withdrawal may plunge the country into a new civil war or allow the Taliban to return to the power they were expelled from at the end of 2001.

Before meeting President Ghani, Blinken visited the US embassy in Kabul and spoke to the audience, almost all of them soldiers. He told them, "What you have done and what people have done before you in the past 20 years is an exceptional act."

The US announcement caused fears among Afghan civil society, which lives daily with fear of explosions and attacks.

"From my point of view, I am a pessimist," said Afghan parliamentarian Nahid Farid, who was present at the US embassy.

Mitra Mahran, an Afghan women's rights activist, said, "We face the risks of losing everything we worked and fought for together over the past 20 years, and this endangers the security of Afghanistan."

The Afghan president announced Wednesday that he "respects" the US decision, saying that the Afghan forces are "fully capable of defending their people and their country," something that experts question.

On the other hand, the US decision angered the Taliban, which saw it as a "clear violation of the Doha Agreement," considering that this opens the way in principle to "all necessary countermeasures" on its part, according to a statement posted on Twitter shortly after Blinken's visit.

The Taliban warned Tueaday that they will rerefuse to participate in a conference on peace in Afghanistan that Turkey, the United Nations and Qatar intend to organize between April 24 and May 4 in Istanbul, "unless all foreign forces finish their withdrawal."

Washington wishes that during this meeting, an agreement will be reached between the Taliban and the Afghan authorities to form a transitional government and a commitment to administer their country on the basis of consensus.

This meeting was supposed to revive the unprecedented direct peace negotiations that began in September between the Taliban and the government in Kabul, but the Taliban’s absence from the Istanbul conference could lead to a new impasse.

Although the Taliban stopped targeting the US military after the signing of the Doha Agreement, it continued to launch relentless attacks against government forces.