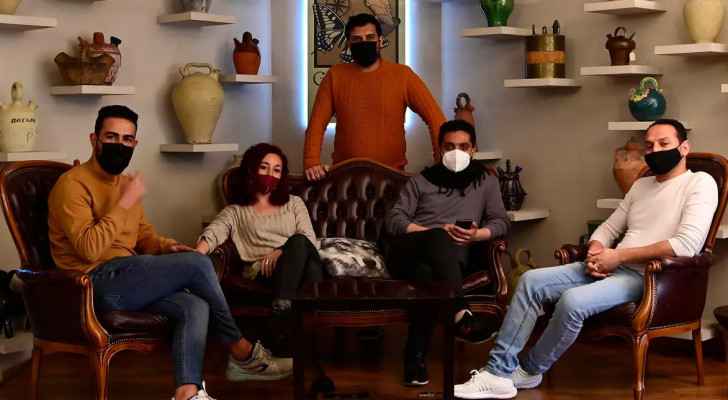 After they developed their sense of journalism during the war in Syria, four Syrians, upon their move to Spain, launched the online magazine "Among Us" in Arabic and Spanish, the first media outlet run by refugees in this country.

Muhammad, Ayham, Musa and Oqba range from 22 to 39 years old, and all hail from the city of Daraa in southern Syria, where the uprising against the regime of Syrian President Bashar al-Assad broke out in March 2011.

The four left their country and moved first to Turkey in early 2019 before heading to Madrid in May of the same year thanks to the Press Protection Committee, a non-governmental organization based in New York.

"When the war began, I was twelve, I was well aware of what was happening because a lot of people were going out to demonstrate near my house, in the mosque," says Oqba Muhammad, the youngest member of the group, which had experience as of 2015 in local media. He was filming "demonstrations" and "bombs."

31-year-old Mohamed Sebat, who said that he worked in Syria and Turkey with the opposition station "Souria TV" based in Istanbul, added, "I did not imagine that I would come here as a refugee or immigrant. I would have imagined myself as a tourist or a student."

- "The beautiful face of immigrants" -

The digital magazine, which was launched on April 7, aims to show "the good face of immigrants to Spain," according to Ayham al-Gharib, 32, who came to Madrid with his wife and two young daughters.

So far, the reporters have featured the story of Ashraf Kashcha, a Moroccan-born YouTube activist fighting Muslim phobia, and the Lebanese Malak Zongi, who trains refugees to become cooks in Spain.

They also hope to provide 'useful information' to Arab communities in Spain. As Ayham al-Gharib explains, "There is not much information available in Arabic to conduct official transactions," to obtain a residence permit, for example.

Journalists themselves faced these problems as asylum seekers. More than 20,000 Syrians have applied for asylum in Spain since 2011, according to the Spanish Committee for Refugee Aid.

"I have been in Spain for nearly two years, and so far I cannot travel or see my family," says Oqba Mohamed. He has not seen his refugee relatives in Jordan since 2014.

Ayham al-Gharib added, "Life in Spain is very safe, but there is also racism towards migrants and refugees," during the search for an apartment for rent, for example.

Between Us is presented as the first media outlet run by refugees in Spain. A similar initiative took place in Germany with the digital magazine "Amal Berlin."

Journalist Andrea Oliya, the project's coordinator, who is charged with translating and adapting the content into Spanish, expects the number of potential followers to be "very large" in a country with about one million Arabic speakers.

Spain will keep register of those who refused COVID-19 ....

Spain will keep register of those who ....