His Majesty recalls sacrifices of nation's martyrs on Jordan's centenary

His Majesty recalls sacrifices of nation's martyrs on Jordan's centenary 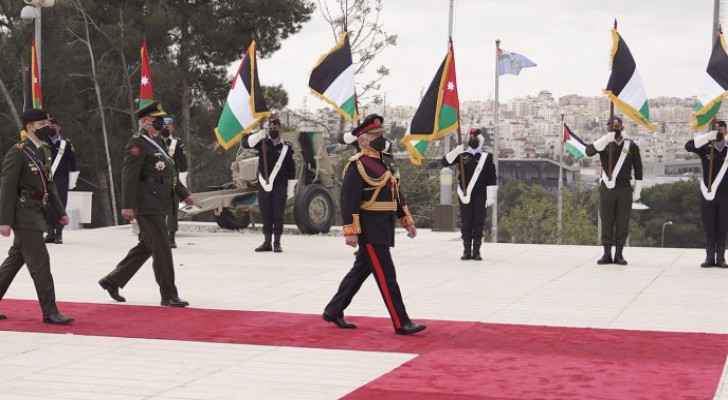 His Majesty King Abdullah II, Supreme Commander of the Armed Forces, accompanied by His Highness Crown Prince Al-Hussein on the occasion of the Kingdom's centenary Sunday, went to the martyr’s memorial in Amman, in remembrance of the sacrifices of the martyrs who died in the defense of the homeland.

On April 11, 1921, the first government in Jordan was created, and this date constituted a declaration of the establishment of the Emirate of Transjordan, under the leadership of His Highness Prince Abdullah bin Al-Hussein, at that time, which after the declaration of independence in 1946 became the Hashemite Kingdom of Jordan.

His Majesty saluted a group of honor guards, and the royal anthem was played.

His Majesty placed a wreath at the tomb of the martyr inside the edifice, and recited from the Holy Quraan.

The Mufti of the Jordanian Armed Forces then called for mercy and forgiveness for the righteous martyrs, and the music played the final tune of return.

His Majesty bestowed upon the martyrs of the homeland among the members of the Jordanian Armed Forces - the Arab Army, and the security services the Medal of the First Centennial State, in appreciation and gratitude to them for their sacrifices and their donation for the sake of the homeland and the nation.

His Majesty the King toured the Martyrs Square, which was decorated with 3,082 Jordanian flags, in symbolic representation of the number of the nation’s martyrs since the establishment of the state.