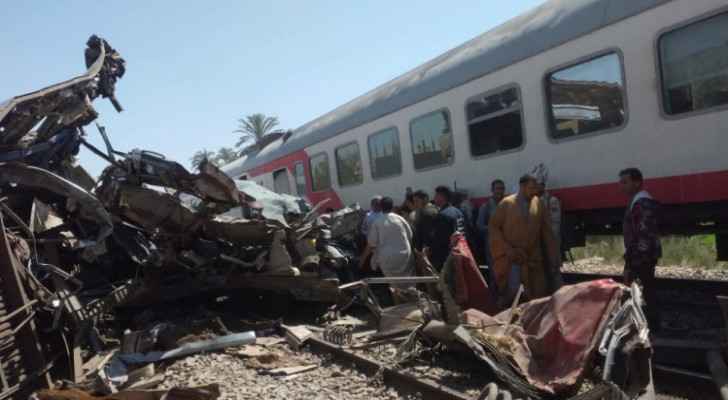 Sunday, the Egyptian Public Prosecution announced the results of its investigations in the case of a collision of two trains last month that left 20 dead and dozens injured in the Sohag Governorate in Upper Egypt.

They announced that the driver and assistant of the "Spanish" express train were not present in the driving car at the time of the accident, which occured when the Spanish train crashed into a stopped train.

The statement, which was published by the prosecution on its official Facebook page, indicated that the Forensic Medical Authority was "decisive that they (the driver and assistant of the Spanish train) did not stay in the front cabin, as they claim."

Investigations also reported that the drivers' automatic braking and control device was stopped on the trains, "on the pretext that it interrupted the movement of the train and delayed its arrival at the stations."

The Egyptian Attorney General, Hamada Al-Sawy, decided at the end of last month to detain the drivers of the two trains, and four officials of the Railways Authority, as a precaution, pending investigations.

The Egyptian Minister of Transport, Kamel Al Wazir, had referred to human error in a telephone conversation with the prominent Egyptian journalist Amr Adib earlier, as one of the reasons for the occurrence of such accidents, stressing that the railway automation system will be completed in 2024.

The deadliest accident occurred in 2002, when 361 people were killed after a crowded train burst into flames south of the capital.