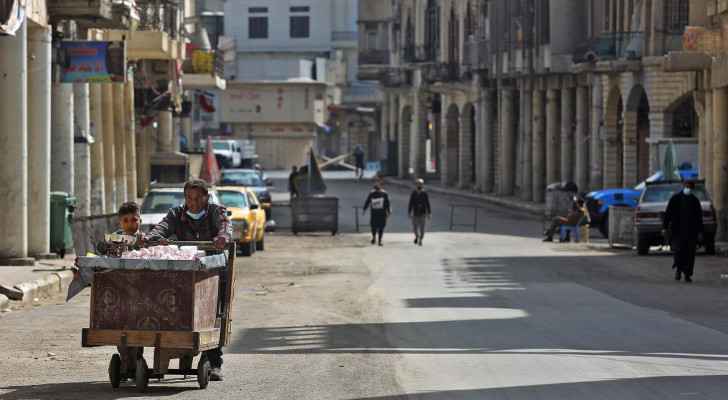 Friday, Iraqi authorities closed neighborhoods in Baghdad while warning that they would close stores whose employees have not received the COVID-19 vaccine.

Since the outbreak of the pandemic in Iraq in late February 2020, many have refused to abide by coronavirus measures. Many still gather for religious services, whilst others refuse to wear masks.

On Friday, concrete blocks were placed at the entrances to some Baghdad neighborhoods, according to AFP journalists, just before the start of Ramadan early next week, during which families gather and collective prayers are held.

For weeks, the authorities have imposed a curfew, starting from eight in the evening. Additionally, the country closes completely on Fridays and Saturdays.

The cement blocks were placed at the request of the government's Supreme Committee for Health and Environment, which is concerned with fighting the epidemic, after a significant increase in the number of injuries during the past days.

New infections range from 7,000 to 8,500 per day in a country that has been suffering from a shortage of doctors, hospitals and medicines for decades.

While only a very small number of Iraqis have received the vaccine, the Ministry of Health warned Friday that it will close any "shopping mall, store, or restaurant unless its workers carry a vaccination card," calling at the same time "airline offices not to cut any travel tickets for any citizen unless he shows a vaccination card. "

So far, only about 130,000 have received the vaccine, according to the Ministry of Health, out of a population of 40 million.

The country has received about 400,000 vaccine doses, most of them through the COVAX mechanism.

In all, the number of people infected with the virus in Iraq has reached 905,000, including more than 14,600 deaths, according to official data. About 40,000 tests are conducted daily.