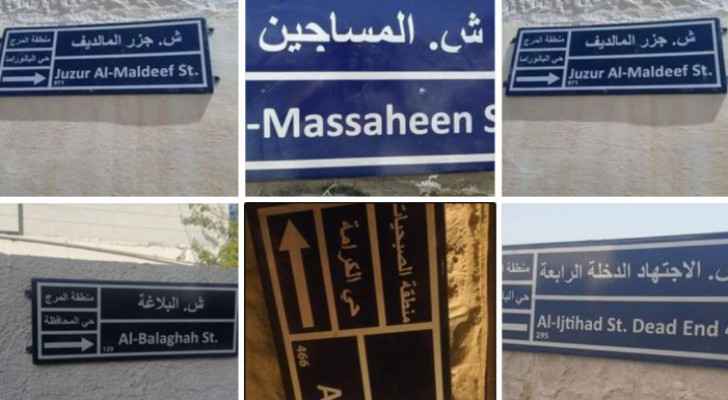 A new numbering and naming campaign for the streets of the city of Karak Thursday, caused the people of the city to question the 'strange' name choices, causing an air of disapproval and ridicule. In turn, the municipality defended the move as the first experience of its kind in the governorate.

The municipality of Karak had given some streets names that the people of the city considered strange, with citizens stating it is more appropriate to name these streets after national symbols or martyrs who died in the defense of the Kingdom.

Citizens of the area stated that the street names bear no connection to the city, or even Jordan.

They indicated that the Karak is full of streets named after martyrs.

In turn, the Greater Karak munipality addressed the matter on Facebook, indicating that the naming and numbering process is a pilot project.

"The Greater Karak municipality notes that the naming and numbering project is a pioneering project that is being implemented as a first stage that includes some areas of the municipality of Karak and is the first experiment of its kind in the governorate."

They continued, noting that this "will be evaluated after the end of the project," adding that observations and feedback will be collected for considerations for the rest of the regions.

The municpality added that at this stage, 1,500 streets have been named.

The project took place in cooperation with the Decentralization and Local Development Support Program (DLDSP) , which is funded by the European Union and implemented by the United Nations Development Program, and the United States Agency for International Development (USAID).

52 percent of isolation beds in use at Karak Governmental ....