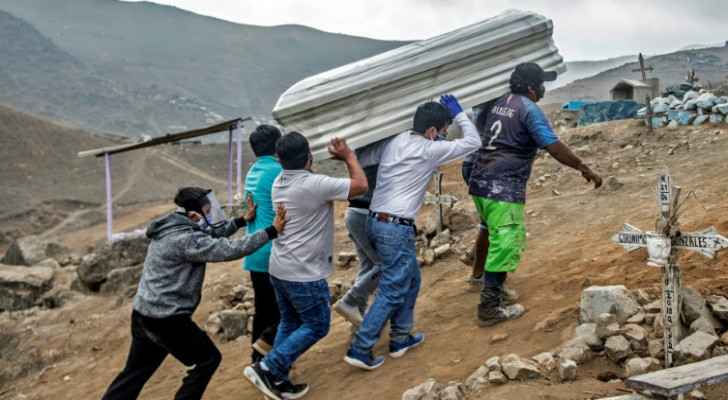 The number of recorded coronavirus infections exceeded 25 million Friday in Latin America and the Caribbean, with the disease prompting several countries to impose travel and movement restrictions in conjunction with vaccination campaigns.

Deaths in Latin America and the Caribbean have exceeded 788,000.

The number of Covid-19 infections in South America has increased in recent months due to the spread of a more contagious mutant which was detected for the first time in Brazil, the largest country of the continent.

"We notice that the P1 mutant is more likely to spread," said PAHO official Silvan Degeri this week.

As hospitals and intensive care units fill up, governments have announced a series of restrictions to try to limit transmission in the region, which consists of 34 countries and territories and is home to nearly 600 million people.

Thursday, Chile closed all its borders, and Bolivia closed its border with Brazil.

Peru imposed a closure on Easter, with a four-day national lockdown and a ban on all flights from Brazil, Britain and South Africa to try to prevent the transmission of virus mutants to its territory.

The President of Ecuador also announced new restrictions against the outbreak, which he described as a "public disaster."

As hospital occupancy rates continued to rise, the city of Rio de Janeiro Friday partially extended stay-at-home orders that went into effect two weeks ago and were due to expire on Sunday.

Even small Uruguay, one of nine countries bordering Brazil, has witnessed a significant increase in the number of infections and deaths after it was considered a model for controlling infection for a long period since the outbreak of the pandemic in December 2019.

This country of 3.5 million people detected the P1 mutant on its soil and recorded 80 percent of its deaths in the first three months of 2021, including 400 in March alone.

Observers attribute the slow pace to the position of President Jair Bolsonaro, who denies the seriousness of the pandemic, which led to a delay in negotiating deals with pharmaceutical companies.

The director of the Pan American Health Organization, Carissa Etienne, said this week that there are not enough vaccines in the Latin America region to stop the spread of the disease, and called for the continued focus on masks, handwashing and social distancing.

"Without precautionary measures, our region could face an even greater spread than the recent increase," Etienne emphasized.

And she continued, "So let me be as clear as possible: my main guidelines for places with significant increases in transmission can be summed up in two words: Stay home."

The Chinese vaccine manufacturer "Sinovac", which produces the "Coronavac" vaccine used in about 20 countries, including Brazil, Mexico and Uruguay, said Friday that it will double its annual production capacity to two billion doses.

Council for Rights of Persons with Disabilities begins ....

Council for Rights of Persons with Disabilities ....

Council for Rights of Persons with Disabilities ....

Council for Rights of Persons with ....

Spring break tourism in Mexico goes on, despite pandemic