Death toll rises to 50 in train derailment in Taiwan 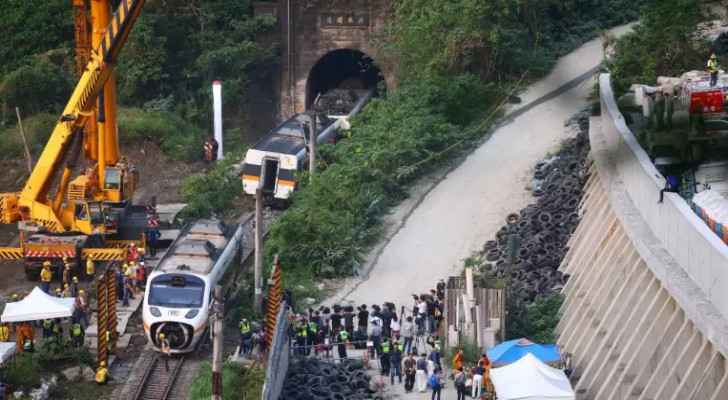 At least 50 people were killed Friday as a crowded train derailed in a tunnel in eastern Taiwan in the worst railway accident on the island in decades.

Authorities said the accident may have been caused by a construction mechanism that slipped off a cliff and collided with a train that was preparing to enter a tunnel near the city of Hualien on the coast of Taiwan.

"A building mechanism that was not properly parked has slid down to the railway," said Cai Ding-Hsien, a police official in Hualien District. "This is our preliminary conclusion and we are trying to clarify the circumstances of the accident," he added.

Media published on the site showed a yellow flatbed truck on its side, near the train.

The railway authority said at least 50 people were killed and 146 passengers were hospitalized. Among the dead were one Frenchman, and the wounded, two Japanese, and a Macao resident. The previous toll indicated 51 dead.

TVS quoted a survivor as saying that some of the trapped passengers were crying, while others lost consciousness. The woman, who was not identified, explained that "many people were stuck under the seats."

"We will definitely determine the cause of this accident, which claimed the lives of a large number of victims," she told reporters.

The president's office said in a statement that she had ordered hospitals to prepare for the arrival of large numbers of injuries, stressing that "the priority is to rescue the stranded people."

The accident occurred on the railway line in eastern Taiwan at around 09:30 (0130 GMT) near the port city of Hualien.

Pictures published on the UDN website show the front of the train inside the tunnel turning into rubble.

In pictures taken by the Taiwan Red Cross, rescuers wearing a helmet and carrying lamps walk on the roof of the destroyed train inside the tunnel to reach the survivors.

Rescuers worked for hours to reach those trapped in the tunnel, using chainsaws to pull them from between the twisted metal sheets.

By the afternoon, no one was left in the vehicles, according to the authorities, but rescuers remained at the site, according to AFP correspondents.

Due to the frequent earthquakes rocking the island, Taiwan has rescue workers ready to respond and help disaster victims.

Those sitting in the back of the train seemed to have relatively survived.

The UDN network said that a team present inside the tunnel broadcast pictures showing at least two vehicles that had not suffered any damage, while rescue personnel helped passengers get off the train.

A woman who survived the accident told a local news network, "I felt as if there was a sudden violent jolt and found myself falling to the ground."

"We broke the window in order to be able to get to the roof of the train and get out," she added.

The eight-carriage train, carrying 480 passengers, connects Taipei with Taitung, a town in the southeast of the island.

The accident occurred on the first day of the annual grave-cleaning festival, which is a long public weekend when roads and railways in Taiwan are usually crowded.

During this period, residents generally return to their villages to clean the graves of their relatives and make sacrifices.

The railway line in eastern Taiwan is a very popular tourist destination and passes along the coast in a scenic area.

This line includes several tunnels and bridges and meanders through majestic mountains and very deep valleys, before descending into the Huadong Valley.

Friday's accident is one of Taiwan's worst rail disasters in decades.

The last major derailment in Taiwan dates back to 2018, killing 18 people in the far south of the same line.

The driver of the eight-car train was charged with negligent homicide.

The accident was the worst since 1991 when 30 passengers were killed and 112 injured after two trains collided in Miaoli.

A30 people were killed in 1981 when a truck collided with a passenger train at a crossing at the same level, in Hsinchu.

Domestic flights may soon be banned in France where train ....

Domestic flights may soon be banned in ....