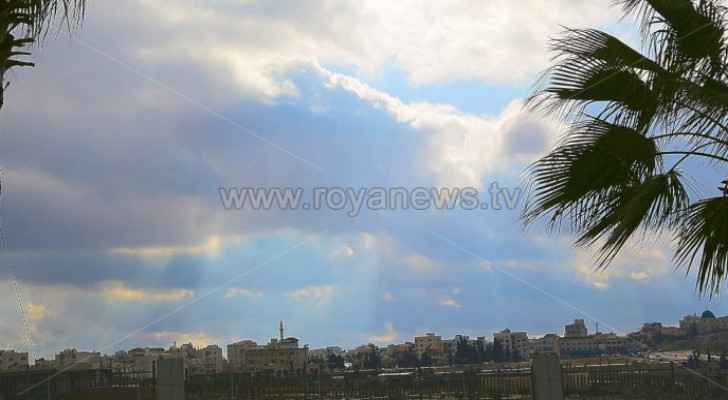 Monday, ArabiaWeather said that another rise in temperatures has been experienced in the Kingdom, to become around their average for this time of year. This will result in pleasant spring-like weather in various regions, leaning towards warmth in the Jordan Valley, Dead Sea and Aqaba.

Some medium and high clouds will appear, and winds will be from northwesterly to northeasterly, and light to moderate in speed.

Monday night, temperatures are expected to become significantly higher than they were in the past nights.

The weather however, will remain relatively cold in most regions at night, and will become more moderate in the Jordan Valley, Dead Sea and Aqaba regions. The winds will be light and changeable.

Tuesday, the daytime temperatures will continue to rise, becoming slightly above their usual rates for this time of year in different regions.

The weather will be warm in most regions, with the emergence of quantities of clouds.

The winds will be southeasterly and moderate in speed, but may become active in the east of the Kingdom, causing dusty weather. During the afternoon hours, winds may become brisk.

Tuesday night, a significant decrease in temperatures paired with an increase in humidity levels is set to be experienced.

The weather will become generally cold and wet, with the appearance of low clouds, some of which may form fog in the high mountain peaks.

Winds will be northwesterly and moderate to brisk.