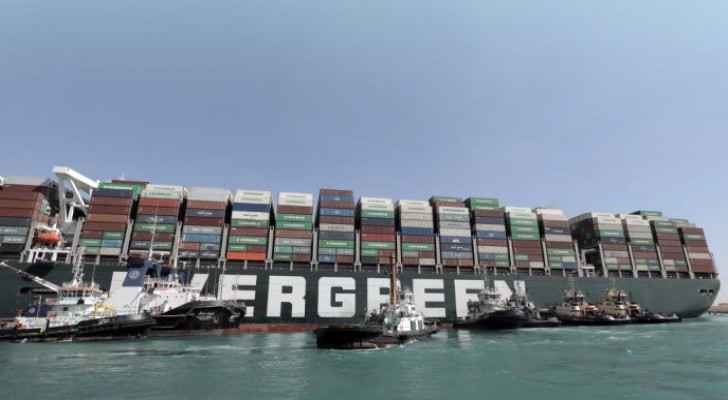 The huge container ship, 'Ever Given' which has been wedged in the Suez Canal for just under a week, has began moving at dawn on Monday, according to ship tracking sites.

The head of the Suez Canal Authority, Osama Rabie, said in a statement that efforts were underway to free the ship. This was done using "tugging maneuvers to float the container ship [using] 10 gigantic tugboats operating from four different directions."

The marine services company "Inchcape Shipping" said on Twitter that the vessel was re-floated at 4:30am.

The MV Ever Given was successfully re-floated at 04:30 lt 29/03/2021. She is being secured at the moment. More information about next steps will follow once they are known. #suezcanel #maritime pic.twitter.com/f3iuYYiRRi

On Twitter, a user identified as Zaid Benjamin, posted a video clip showing what they described as "the first shots of the flotation process."

The video appeared to show the stern of the Ever Given, a part of the Evergreen fleet, swung towards the canal bank, opening space in the channel.

Thursday morning, traffic was blocked in the Suez Canal after a huge container ran aground, which slowed down maritime transport for several days in the main commercial corridor between Europe and Asia. The canal, which runs through Egypt, is one of the busiest trade routes.

The grounding of the ship meant other ships had to reroute around Africa, according to the BBC.

Also Read: The little engine that could: tugboats speed to Suez Canal to free wedged ship