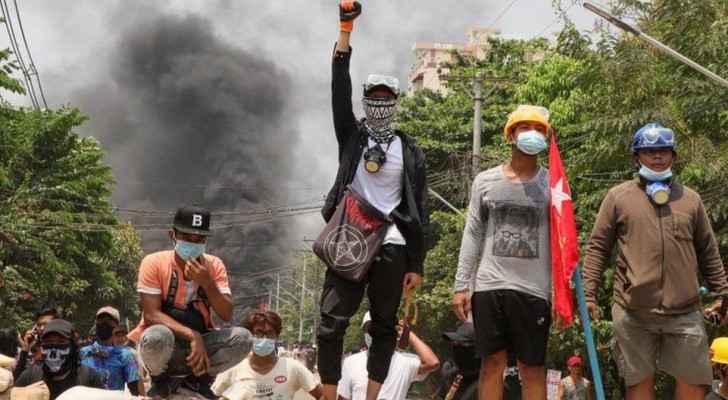 Demonstrators took to the streets again Sunday in Myanmar in the wake of the bloodiest day of repression since the coup on Feb. 1. At least 90 people, including several children, were killed, in acts of violence strongly condemned by the international community.

Activists for the restoration of democracy called for the demonstrations on Saturday, on the day that the army annually organizes a huge military parade in front of the army chief who now heads the military group, General Min Aung Hlaing.

Aid to Political Prisoners, a non-governmental organization that counts the number of people killed since the coup, said "at least 90 people were killed" on Saturday night.

The organization added that the death toll since the coup began has risen to at least 423.

Burma has been in a dangerous crisis since a military coup toppled the leader of the civilian government, Aung San Suu Kyi.

Sunday, the Burmese demonstrated once again to demand the restoration of democracy, while funeral ceremonies are held in various parts of the country.

Early on Sunday, demonstrators carrying flags took to the streets of Pago in northeast Rangoon and in Muniwa (center) and the small town of Mui Kung in Kachin State (north).

In Mandalay, the family of Ai Ko, a father of four who was killed Saturday night honored him at a ceremony on Sunday.

"He was the only provider for the family, and his loss is a great loss for us," one of his relatives told AFP.

On Saturday, military leaders in 12 countries, including the United States, Britain, Japan and Germany, condemned Burma's use of lethal force against unarmed civilian demonstrators.

"As chiefs of staff, we condemn the use of lethal force against unarmed persons by the Burmese armed forces and security services," a joint statement said, adding that "a professional army that follows international standards in its conduct has a responsibility to protect the people it serves and not to harm them."

"We urge the armed forces in Burma to stop the violence and work to restore the Burmese people's respect and confidence, after they lost them due to their actions," the statement added.

The United Nations referred to reports talking about "dozens of dead, including children, and hundreds of wounded," while its Secretary-General, Antonio Guterres, denounced "the strongest terms" of this "massacre."

US Secretary of State Anthony Blinken said on Twitter that Washington was shocked by the "bloodshed committed by the Burmese security forces," while British Foreign Secretary Dominic Raab said that the military group had reached a "new depth" in the suppression of the demonstrators on Saturday.

The US embassy in Rangoon called on its citizens to limit their movement on Sunday.

The consular authority wrote in a tweet, "In the event of having to move, you must exercise caution and make sure that there is an opportunity to communicate with your families."

The American Cultural Center in Rangoon was shot at Saturday.

During his speech on Saturday, the traditional day of the armed forces, the head of the junta, General Hlaing, again defended the coup and pledged to hand over power after new elections.

However, he addressed a new threat to the anti-coup movement, warning that "acts of" terrorism that could harm the stability and security of the country "were unacceptable.

He said, "The democracy we want will be uncontrolled if they do not respect the law and if they violate it."

On Saturday night during an international beauty contest in Bangkok, Burmese candidate Han Lai was buried in tears, calling for peace.

"I am really sorry for all the people who lost their lives in the street," she said in a touching speech, adding, "Please help Burma, we need your international help."

Violence erupted across the country as the military used live bullets in more than 40 of the country's nine regions, including Rangoon, Burma's largest city, according to the Association for the Assistance of Political Prisoners.

Rohingya in Myanmar fear the return of the military to ....

Rohingya in Myanmar fear the return of ....