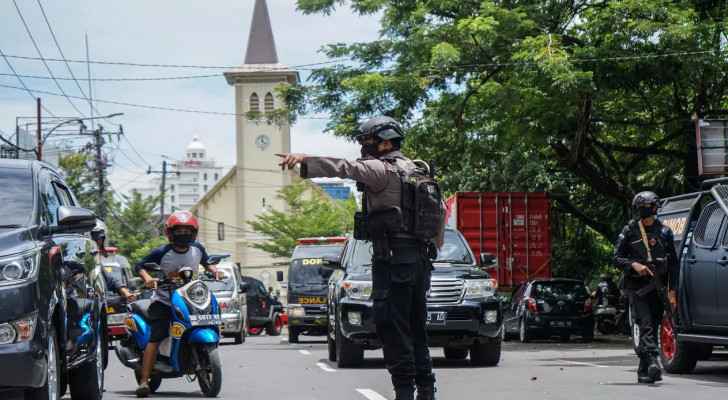 At least 14 people were wounded Sunday in a suicide attack targeting the Makassar Cathedral in eastern Indonesia after Palm Sunday.

The police announced that at least 14 people were injured, without giving details about their health status.

"There were two people on a motorcycle when the explosion occurred at the main entrance to the church, and the two enforcers were trying to enter the church compound," said National Police spokesman Argo Yono.

"The motorcycle was destroyed and there were body parts," he added.

"We are still gathering evidence and trying to determine the gender of the perpetrators."

The police of the southern province of Selawisi, and its capital, Makassar, had announced earlier that at least a suicide bomber was killed. The National Police did not confirm this information.

Mohamed Ramadan, mayor of this coastal city of 1.5 million people, said, "There are a lot of human body parts near the church and in the street as well."

A witness spoke of a "very strong explosion."

Police announced that a security officer tried to prevent the motorcycle from entering the Sacred Heart Cathedral, the headquarters of the Macassar Archdiocese, before the explosion that occurred after the mass.

Christians from the western denominations celebrate Palm Sunday before the start of Holy Week and Easter at the end of next week.

"The mass is over and people were about to leave when the explosion happened," the priest Willemos Tulac told reporters.

Several cars were damaged near the cathedral, where the police imposed a security cordon, according to an AFP photographer at the scene.

And churches have previously been the target of extremist attacks in Indonesia, the most populous Islamic country in the world.

In May 2018, about ten people were killed in suicide attacks that targeted three churches in Surabaya, the second largest city of the archipelago, carried out by a family of six, including two girls and two young sons.

On the same day, a second family detonated a bomb in an apartment, apparently by accident, and the next day a third family committed a suicide attack against a police station.

These attacks, which left a total of 15 dead and 13 dead among the attackers, including five children, were the bloodiest the archipelago has witnessed in more than a decade.

The three extremist families were linked to the extremist group Ansar al-Dawla, which supports the Islamic State, which claimed responsibility for these attacks.

The traditions of tolerance in Indonesia have been on the line in recent years with the emergence of conservative or even militant currents.

More than 200 people were killed in 2002 in attacks on the island of Bali attributed to the Indonesian Jemaah Islamiyah organization.

At least 44 killed by flash floods, landslides in Eastern ....