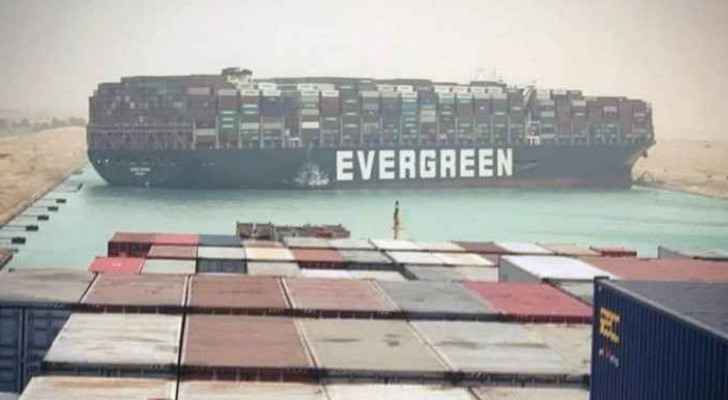 Saturday, attempts to liberate the huge container tanker stuck in the Suez Canal continued since Tuesday, using heavy dredgers and tugboats, while maritime transport remains suspended for the fourth consecutive day in the canal, which is vital for global maritime trade.

The Singapore-based Bernhard Schulte Shipmanagement (BSM), which oversees the technical management of the vessel, said Friday's attempt to float the 400-meter-long container tanker had failed.

However, the Head of the Suez Canal Authority, Lieutenant General Osama Rabie, confirmed in a statement Friday evening that "the efforts to float" will continue, announcing "the start of the towing maneuvers for the ship through nine giant tugsboats (...) after the end of the dredging work in the bow area."

He explained that the towing maneuvers require the availability of several factors, the most prominent of which is the direction of the winds and tides, which makes it a complex technical process that has its own estimates, procedures and multiple attempts according to the places and tests of tension."

The authority had indicated in a statement that the dredging of sand surrounding the ship had been completed at a rate of "about 87 percent, with dredging rates approaching 17 thousand cubic meters of sand."

Notably, the Suez Canal Authority temporarily suspended navigation traffic until the giant ship that has completely blocked the canal is re-floated.

Tuesday morning, the container ship ran aground in the southern side of the canal, near the city of Suez. The vessel, which was on a voyage from China to Rotterdam, is 400 meters long, 59 meters wide, and has a gross tonnage of 224,000 tons.

The Suez Canal Authority stated Friday that it had received an US assistance to "contribute to the [removal] efforts," stressing that it was looking forward "to cooperate with [the US] in this regard, in appreciation of this good initiative."

The authority confirmed that it had received other offers of assistance without naming the countries.

On Friday, Turkey offered to send a dredger to help Egypt float the ship, in attempts to repair relations with regional countries.

Thursday evening, Lieutenant General Mohab Mamish, an advisor to Egyptian President Abdel Fattah El-Sisi for the Suez Canal projects, said that navigation traffic in the canal would resume "within a maximum of 48 to 72 hours."

Memish's statement came after the Dutch company 'Smit Salvage' that was assigned by the 'Evergreen Marine Corp' shipping company, said that the process may take "days or even weeks."

The Dutch dredging and heavylift company Boskalis' CEO Peter Berdowski, Wednesday evening likened the ship to a "very heavy whale on the shore."

Major international shipping companies such as 'Maersk' and 'Hapag Lloyd' are currently studying possible alternatives to overcome the crisis in the face of the disruption of the Egyptian shipping course.

The queue waiting to cross the Suez Canal includes more than 200 ships "now stranded due to the closure," authorities claimed.

Lloyd's List indicated that "rough calculations" indicate that daily ship traffic from Asia to Europe is estimated to be worth about $ 5.1 billion and from Europe to Asia is estimated at $ 4.5 billion.

A senior Russian official said Friday that the disruption of navigation in the Suez Canal underscores the importance of developing the sea corridor across the Arctic, which can be used in an increasing form due to climate change.

It is expected that the accident will slow maritime transport for days, but the economic consequences will remain limited in principle if the situation does not prolonged, according to experts.

Oil prices have witnessed a rise due to the disruption of navigation in the Suez Canal over the past two days.

A Partner & Head of Oil Market Research at Rystad Energy, an independent energy research and business intelligence company, Bjørnar Tonhaugen, said that the price implications will depend on the disruption period, explaining that "the effects are likely to be weak and temporary."

"But if the suspension continues for days, this may have greater effects on prices and for a longer period," he added.

"We have never seen anything like this before, but it is likely that the congestion (...) will take several days or weeks to subside," said Ranjith Raja, in charge of oil research at the US financial data company, Refinitiv.

The Suez Canal secures the passage of 10 percent of international maritime trade traffic, forming a vital link between Europe and Asia.

The canal linking the Red Sea and the Mediterranean was inaugurated in 1869. In 2015, El-Sisi announced a project to develop the canal aimed at reducing waiting times and doubling the number of ships using it by 2023.