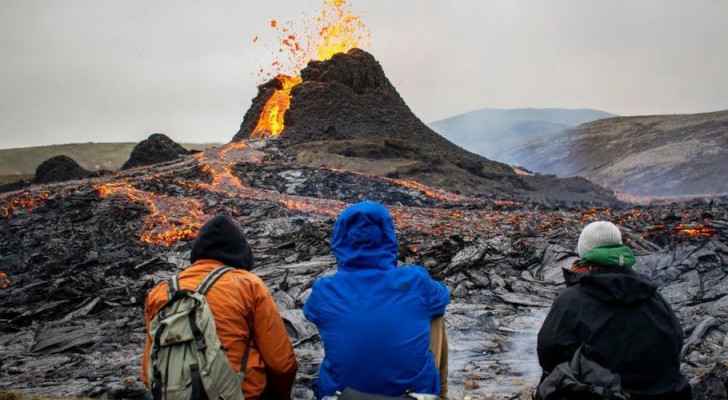 A volcanic eruption in Iceland has transformed a tranquil green valley into an ominous-looking scene, its first dark secrets beginning to emerge as volcanologists suggest the eruption could last longer than previously thought.

Initially, experts had predicted that the eruption of near Mount Fagradalsfjall, just 40 kilometers from Iceland's capital Reykjavik, would be short-lived and would die out a few days later.

However, upon analyzing the constancy of the lava flow and based on the first analyses of the magma, they now suspect the eruption could be a long-hauler.

"The eruption rate has been similar since the beginning of the eruption" on March 19, an Institute of Earth Sciences geophysicist, Freysteinn Sigmundsson, told reporters.

"We have started to wonder if it may eventually be a long duration eruption."

The relatively controlled lava flow has since the weekend drawn crowds to the Geldingadalur valley, eager to catch a rare, first-hand glimpse of the bubbling lava.

According to preliminary calculations, the magma emerging from the volcano is almost 1,190 degrees Celsius, with brave onlookers hiking 90 minutes from the nearest road to have a look while feasting on the basalt rock which came as a result of the hot lava cooling down.

A scientific study of the freshly-minted basalt suggests that the magma has come from deep within the Earth's mantle, around 15 kilometers beneath the surface.

Magma from a source this deep has not been seen in this region for thousands of years, Sigmundsson said.

"Most magmas make their way to the crust by creating their own lineals, by evolving. This magma is coming straight up," explained volcanologist Thorvaldur Thordarson.

Thordarson continued, noting that most importantly, the underground lava flow is similar to the one being seen above ground, suggesting the eruption could be protracted, he said.

"In a system where the inflow is the same as the outflow, you can keep that [going] for a long time."

Due to the location of the eruption, a natural basin in an uninhabited area, experts said a lengthy eruption poses no significant danger to surrounding areas.

Flowing at its current rate, it would take weeks for the lava to reach the closest road, they said.