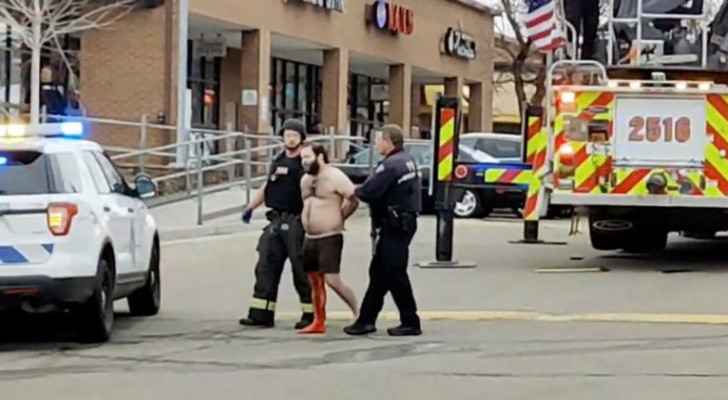 US President Joe Biden called Tuesday for a ban on assault rifles after a new massacre in which a 21-year-old gunned down 10 people, reviving the controversy over firearms in the United States.

The shooting in Colorado comes less than a week after a young man killed eight people in Asian massage parlors in Atlanta, Georgia, prompting urgent calls to the Democratic administration and representatives to act.

The shooter, Ahmad Al Aliwi Alissa, was wounded in the leg and taken to hospital. Boulder Police Chief Marys Herold said that he was in "stable condition" and would soon be transferred to prison.

She explained, "He was charged with 10 murders."

The authorities stated that his motives are not yet known.

And the source added that all the victims, between the ages of 20 and 65, had been identified. Herold said the dead policeman was a "father of seven."

US President Joe Biden requested that flags be at half-mast in all official buildings.

He declared, "I do not need to wait another minute, nor another hour, to take reasonable steps that would save lives in the future and urge my colleagues in the House and Senate to act," stressing, "We must ban offensive weapons."

Scenes broadcast live by an eyewitness showed two policemen leading a man in only sporty shorts outside the store with his hands tied behind his back, and he appeared to be wounded in the leg with traces of blood.

Nevin Sloan, who, with his wife Kenlan survived the shooting, described the panic that spread in the store and increased as the shots approached, as customers wondered if they should hide inside or flee.

He told CBS, "Suddenly we heard more gunshots. I ran towards my wife and told her he had to get out of here." He said they also helped other customers escape from the emergency exit.

The authorities announced that two policemen went to the scene "minutes later" after informing them of the presence of a shooter in the car park of the store, and "quickly" entered it.

And frequent shootings, especially in schools, commercial centers and places of worship in the United States, and successive governments have been unable to put an end to them.

Democratic Speaker of the House of Representatives Nancy Pelosi said, "We must act now to stop this scourge that continues to harm our society."

The leader of the Democratic majority in the Senate, Chuck Schumer, condemned "the continuing epidemic of gun violence that is claiming innocent lives at a horrific rate."

"We will not tolerate the violence that firearms implant in our supermarkets, massage parlors and our homes as if it were normal. It is time for our leaders to act and protect us from gun violence," said Shannon Watts, founder of Mothers Demand Action.

But the hypothesis of tougher firearms laws remains unlikely given Republican opposition.

And it has already seen a Colorado two of the worst massacres in the history of the United States.

In 1999, 12 boys killed their classmates and a high school teacher in Columbine. In 2012, a gunman killed 12 people in a cinema in Aurora.

The city of Boulder announced a ban on "weapons of the type of machine guns" and large-capacity servers after shooting at a high school in Parkland (17 dead) in Florida (southeast) in 2018. But according to the newspaper, "Denver Post", a judge suspended this ban this week. Last, in a resolution welcomed by the National Rifle Association, the United States firearms lobby.

Ten dead, including policeman, in Colorado ....

Ten dead, including policeman, in Colorado ....

Ten dead, including policeman, in ....