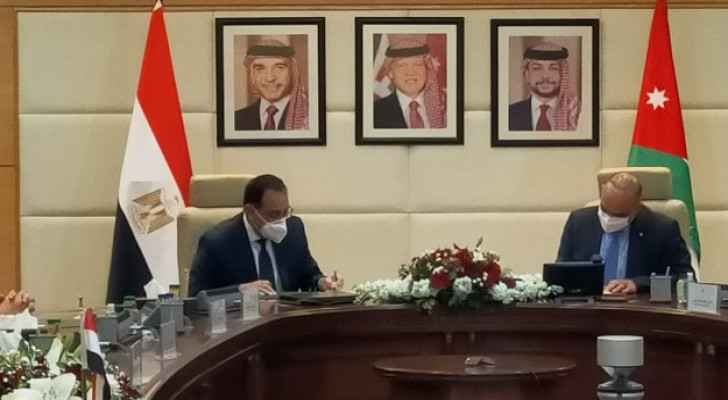 After welcoming the Madbouly and his delegation, Khasawneh described the committee as "productive."

Al-Khasawneh added that relations with Egypt are exemplary at the level of the two leaderships, peoples and institutions.

Khasawneh noted that the meeting resulted in the signing of agreements in several areas, including water resources, communications, urban development and housing.

The PM emphasized how deeply rooted Jordanian-Egyptian relations are, adding that the two nations see eye-to-eye on Arab causes and issues, including the Palestinian cause and the establishment of an independent Palestinian state based on pre-1967 lines with East Jerusalem as the capital.

Khasawneh noted of Jordan's appreciation of Egypt’s stances support for the Hashemite Custodianship over important Muslim and Christian sites in Occupied Jerusalem.

Khasawneh referred to relations between Jordan, Egypt and Iraq, adding that they set the ground for establishing deepened economic integration, especially in the energy domain, noting that the arrangement would be consistent with other pan-Arab cooperation mechanisms. Madbouly noted that there are intentions to double trade exchanges between the three countries.

In regards to the coronavirus pandemic, the PM stated that the crisis has led to overall changes in the global economy, imports, exports and transit movements.

But "the wheel of life must continue," he stressed.

In turn, Madbouly noted the success the committee has achieved, stressing that Egypt is keen to hold more meetings on a regular basis to appeal to the bilateral ties.

Additionally, he stressed the vitalness of overcoming the repercussions of the pandemic and restoring two-way trade between Egypt and Jordan back to normal, voicing his appreciation towards the care and attention that Egyptian workers receive in the Kingdom.

The pandemic caused the most severe conditions the world has seen in 100 years, said Madbouly.

Moreover, ministers and officials from both Egypt and Jordan discussed several routes to enhance the ties between the two states, including trade, enhancing electrical linkage, boosting gas and oil cooperation, increasing agriculture imports and exports, and facilitating methods to increase Jordanian medicines into the Egyptian market.

Cyber bullying equally significant as other forms of ....

Cyber bullying equally significant as other ....

Cyber bullying equally significant as other ....