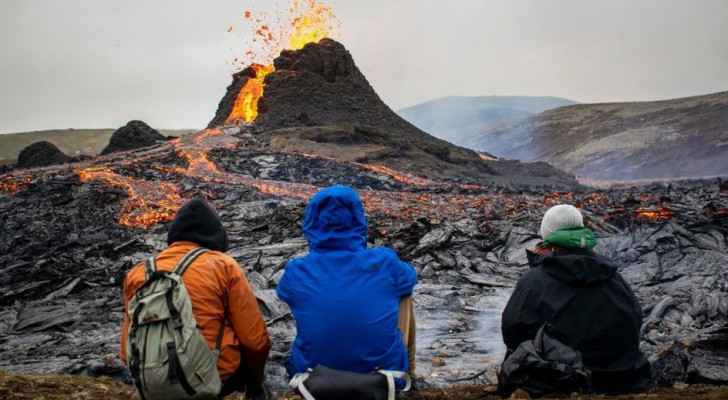 A volcano that spewed glowing red lava near Iceland's Reykjavik after erupting for the first time in 900 years Friday, appeared to be subsiding Saturday, posing no danger to people, according to experts.

Streams of red lava bubbled and slowly flowed out of a fissure in a valley in Geldingadalur, an area close to Mount Fagradalsfjall on the Reykjanes peninsula in Iceland.

As the lava flow slowed under rain showers that poured Saturday, a blue gas plume and a vapour cloud rose from the site, just 40 kilometres from the capital and near the Blue Lagoon geothermal spa, a very popular tourist destination.

The initial volcanic eruption occurred Friday, which ignited the night sky with a crimson glowy aura as hundreds of small earthquakes rumbled in the area.

The eruption posed no danger to the general public as it is uninhabited, despite Keflavik International Airport being just a few kilometers away.

"The eruption is considered small at this stage and the volcanic activity has somewhat decreased since yesterday evening," said the Icelandic Meteorological Office (IMO).

The IMO said the "eruptive fissure" measured approximately 500 to 700 meters, adding that the area where lava spread to was less than one square kilimeter.

A University of Iceland geophysicist, Magnus Tumi Gudmundsson, described the valley as an "ideal" spot for the volcanic eruption, likening it to "a bathtub the lava can slowly leak into."

Friday's eruption took place in the Krysuvik volcanic system, which does not have a central volcano, about five kilometers inland from the southern coast.