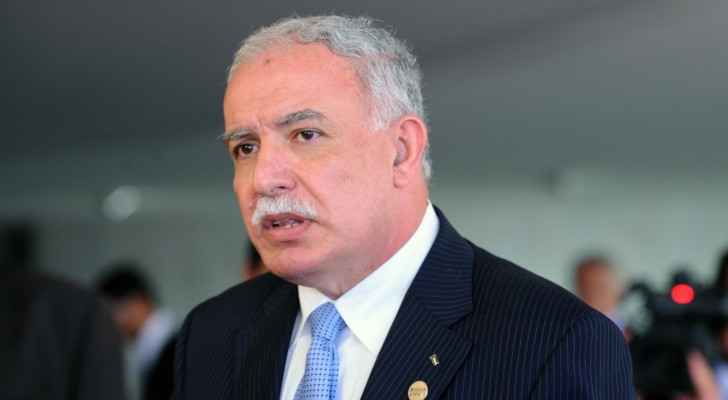 Monday, the Palestinian government condemned what its Foreign Minister Riyad Al-Maliki was subjected to upon his return to Palestine Sunday through an Israeli Occupation crossing. They described it as 'harassment.'

"We condemn the harassment that the Foreign Minister and his accompanying delegation were subjected to during his return from a meeting with the Prosecutor of the International Criminal Court," Palestinian Prime Minister Muhammad Shtayyeh said.

Last Thursday, al-Maliki and a delegation from the Palestinian Ministry of Foreign Affairs met with the Prosecutor of the International Criminal Court, Fatou Bensouda, as part of continuing work and cooperation with the court, which decided to open an investigation into alleged crimes committed by the Israeli Occupation army in Gaza.

"I confirm that the Office of the Prosecutor of the International Criminal Court has opened an investigation related to the situation in Palestine," Bensouda said in a statement at the time.

The Palestinian Ministry of Foreign Affairs announced on its website that the Israeli Occupation side withdrew the VIP card from Minister Riyadi Al-Maliki and canceled the coordination of traffic through the crossings and borders. The accompanying delegation was also summoned for investigation.

Assistant Foreign Minister Ammar Hegazy told AFP that he was stopped with another colleague for about two hours, "including an hour and a half for talking and investigating our last tour to the International Criminal Court. They told us that this issue for them is sensitive and they will not allow us to move about it easily."

"This intimidation will not prevent justice from taking its course," Shtayyeh asserted.

France Press was not able to obtain an Israeli Occupation response immediately.

The Israeli Occupation issues special movement cards to Palestinian officials at the military crossings, and through them, their movements are coordinated.

The Undersecretary for the Ministry of Foreign Affairs, Ahmed Al-Deek, stated in a statement that the Israeli Occupation side had subjected the delegation accompanying Maliki to investigation.

He said, "The Palestinian Ministry of Foreign Affairs will initiate contacts with the international community to inform it of the Israeli sanctions campaign that was imposed against Minister Al-Maliki and his team."

The Palestinian Ministry of Foreign Affairs welcomed the decision of the International Criminal Court to conduct an investigation related to the situation in the occupied Palestinian territories, while the Israeli Occupation condemned this decision and considered it "political" and falls within "moral and legal bankruptcy," according to what Foreign Minister Gabi Ashkenazi said in a statement.