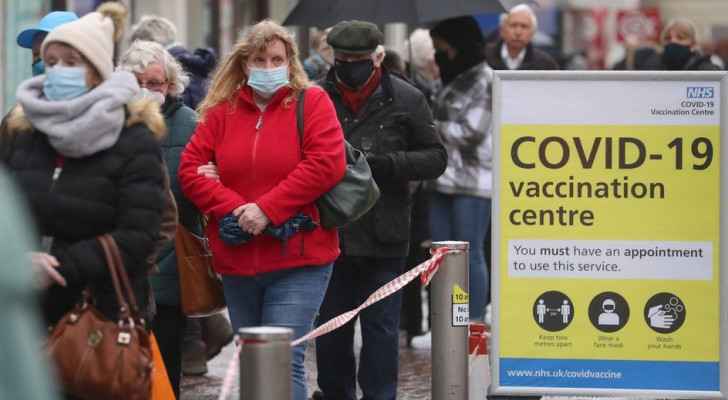 As Briton Darren Buttrick's oxygen levels plunged dangerously low, he had a mere 15 minutes to call his family before he was sedated and put on a ventilator.

"Those 15 minutes were the worst of my life, just ringing my wife, hearing her cry," he recalled, looking back on the year since he first contracted the virus in March 2020.

The British government confirmed the first death from the coronavirus March 5 2020, and since then, the death toll has climbed to more than 125,000, making it the highest in continental Europe.

Although many who fell ill early during the COVID-19 pandemic last year have made full physical recovery, the psychological impact remained.

"It's still very raw, it's still very emotional," said Buttrick, as he remembered lying in the hospital surrounded by other patients who resembled a bundle of cables as they were hooked up to bleeping machines.

Many did not survive.

He recalled thinking, "Once I'm put to sleep, I may never wake up," adding that the experience changed his outlook on life.

Buttrick became less of a workaholic in his job as mobile phone operator sales director and began focusing more on quality time with his wife and three daughters.

Additionally, he also became Britain's most prolific plasma donor, giving blood 24 times in 10 months -- the most allowed -- to help other sufferers in a trial.

Another family hit severely by the virus, were the Patels, live around 45 miles (72 kilometres) east of Wolverhampton in Oadby, on the outskirts of Leicester. Three generations live together in their large house and all six family members contracted the virus in March 2020.

"I knew deep down that it was probably the last time I'd see him," said Sanjiv.

Shortly thereafter, Sanjiv and his 25-year-old son Akash felt ill and called an ambulance as well.

"My dad's lying on his front and literally gasping for breath," recalled Akash, who works for a consulting firm.

While Sanjiv was in hospital, doctors told him that his father Anand would not survive and Sanjiv was forced to break the news in a video call to his family, who were unable to visit.

The night in hospital after his father's death was the "toughest," he said.

"I was drowning, I was choking, my lungs were that congested," he said.

Luckily, after a week, Sanjiv was well enough to leave the hospital but remained weak to the extent that he had to use a home stairlift.

Recovery was slow, he pointed out, with his heart still racing while doing simple tasks months later.

Leicester has a higher-than-average number of coronavirus cases, which some link to multi-generational households and work in garment factories.

Over half of Britain's adult population has now been vaccinated, bringing hope of release from lockdown. However, Leicester, one of Britain's most ethnically diverse cities, has seen a slower take-up of jabs.