Mothers demonstrate in Beirut against the Lebanese political class 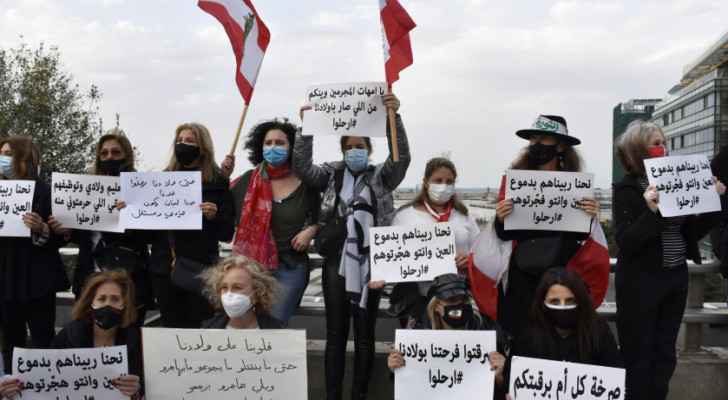 About 100 mothers organized a march on Saturday in the Lebanese capital to express their anger and anger at the ruling political class in a country experiencing a serious economic and political crisis.

"You stole our money and our children's future, #Leave," read banners held by women, some of them accompanied by their children.

"The best gift for Mothers' Day is that you (to) leave," read a sign, as Mother's Day falls on Sunday in Lebanon.

A women's march on the occasion of Mother's Day took place from Bechara El-Khoury Avenue and crossed several neighborhoods in the capital amid anti-authority slogans, towards the Beirut port, in which an explosion killed more than 200 people in August and attributed the reason to the negligence of the authorities.

"They are all war criminals, all of them are warlords," Nada Agha told France Press, referring to the current officials who were leaders of armed militias during the civil war (1975-1990).

"They have been sharing the shares for 30 years (...) Finally, they bombed us and stole our money. We want them to leave!"

For her part, Petra Saliba, a 50-year-old demonstrator, said, "They destroyed the country. It is impossible for there to be any solution as long as they are in power."

"We want to destroy them as they did to us," she added.

Since the fall of 2019, Lebanon has been witnessing an unprecedented financial crisis that has prompted banks to impose harsh restrictions on depositors.

The national currency lost 90% of its value on the black market, while thousands of jobs evaporated. According to the United Nations, more than 55 percent of the four million Lebanese live below the poverty line.

The calls from the international community and local pressure were not enough to compel the political class to take the urgent measures necessary to stop the collapse.

The current government, which resigned after the Beirut Port bombing, is in charge of caretaker business. No new government has been formed yet.