Lebanese president to PM-designate Hariri: Form a government immediately, or step down 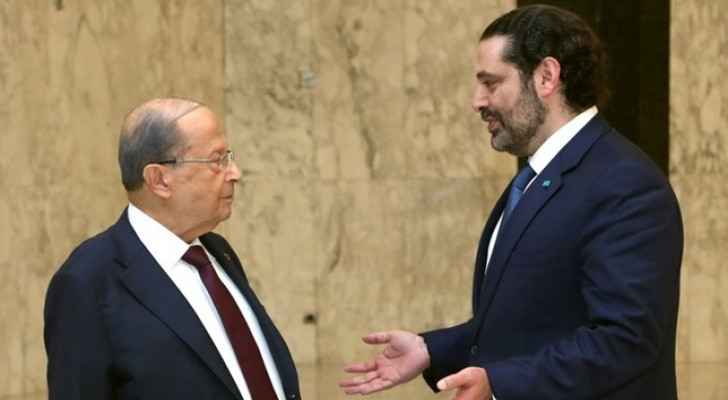 Aoun said in a televised speech, "I invite him to Baabda Palace for the immediate formation of the government, in agreement with me, in accordance with the mechanism and constitutional standards adopted for forming governments without arguments or delay."

He added, "But if he finds himself unable to form a government... then he must make room for everyone capable of forming a government."

He affirmed, "My call is resolute and sincere to the PM-designate until he immediately initiates one of the two available options."

Despite the weight of the economic collapse that Lebanon has been witnessing for a year and a half, international pressures, led by France in particular, have not resulted in the formation of a government capable of carrying out urgent reforms that would pave the way for Lebanon to obtain necessary international financial support.

Hassan Diab's government resigned after the horrific bombing of the Beirut port on Aug. 4. After a long wait, Aoun appointed in October the former prime minister and leader of the Future Movement, Saad Hariri, to form a new government.

Since then, Hariri and Aoun have traded accusations of obstruction and setting counterconditions.

Press reports indicate that Aoun and his political movement’s persistence in obtaining a likely government share is what is hindering the birth of the government, although he denies this. Reports also speak of Hariri's insistence on forming a government of specialists consisting of 18 ministers, while Aoun calls for an increase in the number of ministers.

Usually the formation of governments in Lebanon is delayed for several months due to the tensions between the political parties and their quota disputes. The economic collapse, which was exacerbated by the explosion of the port and measures to combat the coronavirus, prompted the international community, led by France, to pressure Lebanese officials to speed up the formation of the government.

"The pressure must be greatly increased on political leaders. This will be the work of the coming weeks," a French diplomatic source told reporters on Wednesday, adding, "We will not move alone, but with our European partners and with the Americans."

"The issue of sanctions was not a priority in August and September, but after six or seven months, it became legitimate," he said.

French President Emmanuel Macron has visited Lebanon twice since the port blew up and repeated the demands of the political forces to form a government that would undertake reform. In September, he announced an initiative that he said all political forces had agreed to and stipulated the formation of a government within two weeks.

The political paralysis in the country exacerbates the anger of the Lebanese.

Since the beginning of this month, the protests have returned to the streets of Lebanon with the continued deterioration of the Lebanese pound, which recorded a record low on Tuesday and the exchange rate against the dollar touched the threshold of 15,000 pounds on the black market, in a continuous free fall since the start of the economic collapse.

For days, demonstrators blocked main roads across the country. The movements continue almost daily, but with less clamor.

The collapse of the lira is reflected in commodity prices, which rose by 144 percent, according to estimates by the International Monetary Fund.

More than half of the population is below the poverty line.