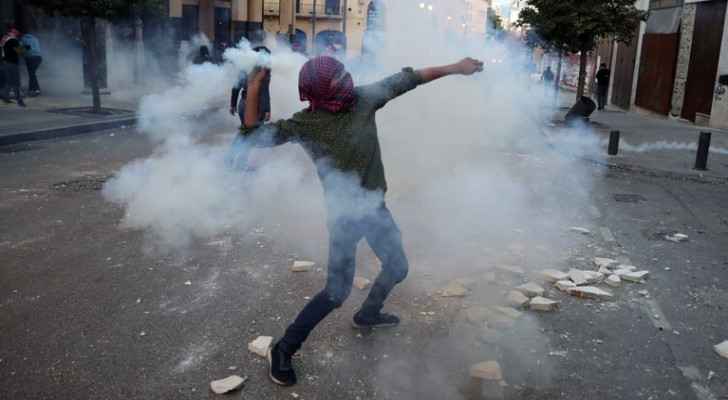 Wednesday, protesters tried to storm the headquarters of the Ministry of Economy in downtown Beirut to protest against the unprecedented price hikes and the decline in the citizens' purchasing power, with the lira’s record deterioration this week.

The rapid change in the exchange rate in recent days has pushed a number of supermarkets to close their doors to re-price their goods. Also, factories closed their doors pending the stability of the exchange rate. Shops witnessed clashes between citizens over the purchase of subsidized goods , and petrol stations stopped operating.

Since Wednesday morning, a number of protesters have gathered in front of the Economy Ministry headquarters in downtown Beirut, according to an AFP correspondent.

Some of them tried to storm the building, which led to a problem between them and the security forces, according to what was reported by the National Information Agency.

"We quarrel with each other over a diaper bag or a package of milk," one of the protesters told a local channel, adding with emotion, "They humiliated us."

The decline in the local currency is reflected in the prices of commodities, foodstuffs, and everything that is imported from abroad. Commodity prices have increased by 144 percent, according to estimates by the International Monetary Fund. More than half of the population is below the poverty line.

On Wednesday, the representative of the fuel distributors in Lebanon, Fadi Abu Chakra, announced a new increase in the price of fuel that exceeded 4,000 pounds per liter within a week.

Thus, the price of gasoline rose by about 49 percent between July 24 and March 17.

In light of the scarcity of liquidity and the depletion of the Central Bank’s reserves allocated to support the main consumer goods, experts warn that “the worst is yet to come,” while the political forces are unable to form a government that will proceed with urgent reforms to secure the support of the international community.

The depletion of the central bank’s dollar reserves, which are mainly used to support the import of wheat, fuel and medicines, would render the state unable to provide the most basic services.

Since the beginning of this month, protests have returned to the streets of Lebanon. For days, demonstrators blocked main roads across the country.

The movements continue almost daily, but with less clamor.