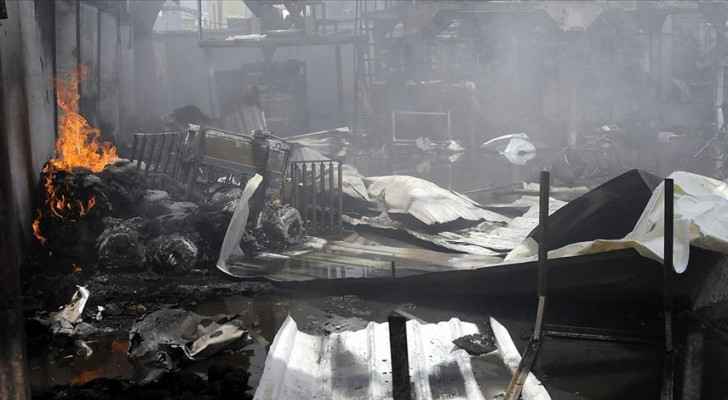 Human Rights Watch Tuesday accused Yemeni rebels of launching "unknown projectiles" at a detention center for African immigrants in Sanaa during a demonstration to demand improvement in their living conditions, causing dozens of deaths.

The rebels have controlled the capital and most of northern Yemen since the power struggle erupted in 2014 with an internationally recognized government, and they fight daily battles with the pro-government forces in a war that has caused tremendous destruction in the impoverished country.

The statement explained that the center guards and other armed men transferred groups of immigrants to one of the sites after they refused to eat breakfast and clashed with security personnel, and asked them to recite their "last prayers."

Then a member of the security force climbed onto the roof of the closed site and fired two "projectiles" into the room, causing a fire, Human Rights Watch quoted five of the detainees who survived.

One of the migrants said, "I was terrified, as if smoke paralyzed my mind. People were coughing, and fires burned bed and blankets ... People were burnt alive. I had to step on their bodies to escape."

Hundreds of migrants were treated in the capital's hospitals amid intense security deployment, while others fled to areas of Yemen, including Aden, in the south.

The International Organization for Migration of the United Nations initially announced the death of eight immigrants, then spoke, according to local reports, of the death of about 60, calling on the authorities in Sana'a to allow "urgent" access to provide treatment for the injured.

The rebels held the Immigration Organization responsible for the fire, due to the lack of suitable shelters.

Their spokesman, Muhammad Abd al-Salam, said in correspondence with Human Rights Watch that "the accident that occurred is a regular result that occurs in similar incidents everywhere in the world and should not be politicized or exploited outside its natural context," calling for "the opening of Sanaa airport for their return to their countries."

Despite the six-year-old war that has killed tens of thousands and displaced millions in the context of a humanitarian crisis that the United Nations considers the worst in the world, Yemen is a transit station for tens of thousands of migrants traveling between the Horn of Africa, Saudi Arabia and other Gulf countries.

According to one immigrant who spoke to Human Rights Watch, they are often subjected to "racial insults, threats, and repeated insults," while food is limited and drinking water is scarce in a country on the brink of starvation.