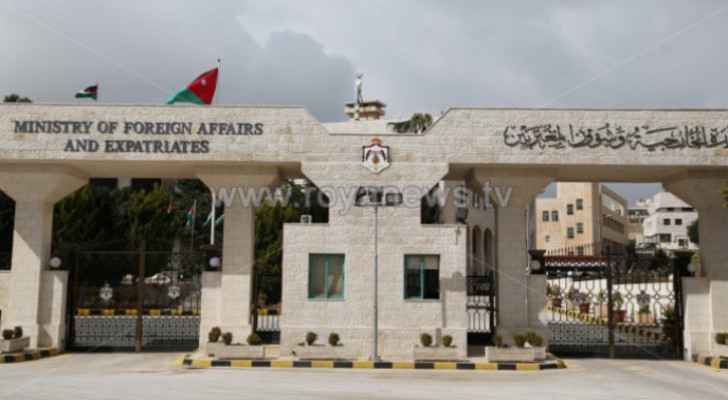 The Ministry of Foreign Affairs and Expatriate Affairs Sunday condemned the Czech Republic's opening of a diplomatic office in Occupied Jerusalem, considering it a clear violation of international law.

He said that any measures or decisions aimed at changing the status of the city of Jerusalem or its legal status are considered invalid, illegal, and without legal effect.

Al-Fayez affirmed that achieving a just and comprehensive peace plan is the only way to reach a two-state solution based on international legitimacy decisions, which embody the independent Palestinian state on the June 4, 1967 lines, with East Jerusalem as its capital.

Notably, the Palestinian Authority (PA) and the Arab League have condemned the Czech Republic’s decision as well.

Thursday, Prague opened an Occupied Jerusalem branch of its Israeli Occupation embassy, which is located in Tel Aviv.

The opening was attended by Czech Prime Minister Andrej Babis, merely two weeks after the Israeli Occupation gave the republic 5,000 Moderna vaccine doses under a “vaccine diplomacy” program that later came under legal scrutiny and was stopped.

The Foreign Ministry of Palestine Saturday called the move “a blatant attack on the Palestinian people and their rights, a flagrant violation of international law," and said it would harm peace prospects.

Additionally, Arab League Secretary-General Ahmed Aboul Gheit said in a statement, “The legal status of Jerusalem will be affected by the decision of one country or another to open representative offices. East Jerusalem is an occupied land under the international law.”

Stressing that the Occupied Jerusalem office was not an embassy, the Czech Foreign Ministry said it was meant to strengthen Prague’s strategic partnership with the Israeli Occupation and improve services for Czech citizens there.

“The establishment of the office has no impact on the will of the Czech Republic to further develop political and economic relations with the Palestinian Authority,” it said.

Within the EU, the Czech Republic is one of Israeli Occupation’s strongest supporters.

Although it formally supported a two-state solution, the republic was named in an International Criminal Court pre-trial decision last month as one of the countries supporting the Israeli Occupation’s argument that the court should not investigate war crimes in the occupied Palestinian territories.

Babis said his country regarded the ICC’s decision to proceed with an investigation as “unfortunate,” adding, “Though we respect the independence of the court, the Czech Republic doesn’t consider Palestine to be a state, therefore the court has no jurisdiction over it.”

Kosovo also said it was ready to set up its Israeli Occupation mission in Occupied Jerusalem, in exchange for recognition, as it seeks to further legitimize its 2008 declaration of independence from Serbia and statehood.

Thousands rally against Czech government in ....

Thousands rally against Czech government in ....