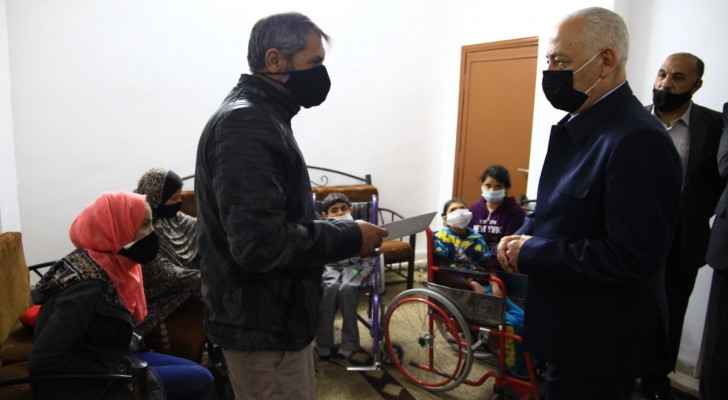 Saturday, a total of six underprivileged families received their newly-refurbished homes in the Mugabalain area in southern Amman, after maintenance work was conducted under the Royal Initiative for the housing of poor families across the Kingdom, in cooperation with the Jordan Hashemite Charity Organisation (JHCO).

The initiative was launched in 2005 upon a directive by His Majesty King Abdullah II to improve the quality of life of families in need. Families are selected based on fair and transparent criteria by the Ministry of Social Development.

The Royal Court Chief and head of the committee to follow up on Implementation Yousef Issawi handed the keys to these families during a ceremony attended by Minister of Public Works and Housing Yahya al-Kasabi and Minister of Social Development Ayman al-Mufleh.

In Madaba, Issawi also inaugurated the women's development centre, which involves the Jordanian National Women's Committees and the Jordanian Women's Federation. Accompanied by the ministers and the governor of Madaba, the Royal Court chief toured the facilities of the center.

Issawi also inspected the Madaba Industrial City project, which His Majesty King Abdullah II laid the foundation stone for during a visit to the governorate in 2016 with the aim of attracting investments to the region and providing job opportunities.