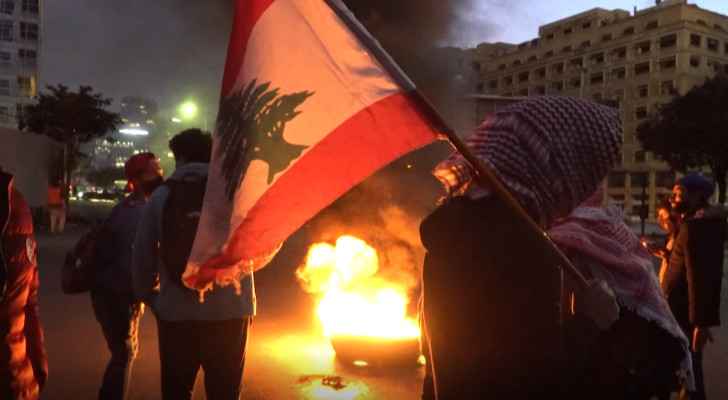 The Lebanese pound hit an all-time low against the dollar Tuesday, prompting a new series of angry protests over a deepening economic crisis that has thrown well over half of the population into poverty.

The pound had been pegged to the US dollar at 1,500 since 1997. However, the country's worst economic crisis since the 1975-1990 civil war has seen its unofficial value plummet even more.

On Tuesday, it was trading at nearly 10,000 Lebanese pounds to the US dollar on the black market, money exchangers told reporters.

A money exchanger, who chose to remain anonymous said: "It's crazy what's happening."

As night fell, protesters proceeded to block off roads in the capital, Beirut and many other parts of the country, some of them burning tyres.

"What is happening is unacceptable... People need to revolt," one protester told a television channel in the capital.

Additionally, demonstrations were seen in Tripoli in the North, Saida in the south, and Bekaa in the east.

The devastating depreciation came as the central bank started reviewing Lebanon's lenders, under international pressure for reform. As part of a series of demands, it had given them a Sunday deadline to increase their capital by 20 percent.

Monday, a central bank committee "agreed on a roadmap with deadlines for the Bank of Lebanon to take appropriate measures" if these requirements were not met, it said in a statement.

In turn, Lebanon's Al-Akhbar newspaper said Tuesday that the currency plunge was partly the outcome of commercial banks sucking dollars out of the market to meet the financial demands of the central bank.

The plummet in the value of the currency led to food prices soaring out of control in a country where over 50 percent of the population now live below the poverty line.

Notably, Lebanon has been without a fully functioning government since outgoing premier Hassan Diab resigned in the wake of a fatal explosion at Beirut port in 2020 which claimed the lives of over 200 and piled new mistery on a state which was already on its knees by the economic crisis.

"They've driven us to begging, they're starving us," one protester said.

"We've been sitting at home for ages, then there was the port blast, and they haven't formed a government. We've had enough of this ruling class."

The economic crisis also had a domino effect on the neighbouring country of Syria, whose currency hit a record low Tuesday as well, compounding the economic catastrophe caused by a decade-long civil war.

The exchange rate reached 4,000 Syrian pounds to the US dollar in Damascus.

"What's happening in Lebanon is affecting the Syrian pound because Lebanon is one of the main channels for the Syrian government to the external market," analyst Zaki Mehchy told AFP reporters.

However, Mehchy indicated that the aforementioned factor was just one reason why the currency dropped in value on the black market.

Several areas in Syria controlled by the government, under Western sanctions, have long relied on Lebanon as a conduit for dollars.