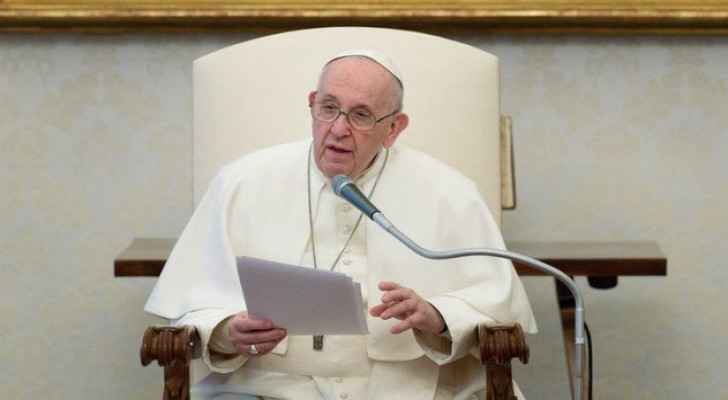 Pope Francis arrived in Baghdad around 2:00pm local time after leaving Rome Friday morning for a historic trip to Iraq, his first trip abroad since the coronavirus pandemic began, according to an AFP reporter aboard his plane.

The Vatican has planned a busy three-day program for the Pope, which is intended to bring 'comfort' to Iraq's devastated Christian communities and will mark a high point in his continued outreach to Muslim communities with a meeting with the Shiite cleric Grand Ayatollah Ali Sistani.

In televized statements Thursday, Pope Francis said, "I come as a pilgrim of peace in search of fraternity, motivated by the desire to pray together and to walk together, even with brothers and sisters of other sisters of other religious traditions, in the sign of Father Abraham, who brings together in one family Muslims, Jews and Christians."

Ahead of the Pope's arrival to Erbil, Iraq, a Roya correspondent spoke to locals. A man selling coffee in a town square said "Muslims, Christians, and any other person... We are all one (...) everyone is welcome here."

Residents of Najaf, Iraq, praised the Pope's historic visit and his symbolic meeting with Sistani, saying that it will support the country's mission for "peaceful coexistence" between different religions.

A Professor at Al-Hawza Al-Ilmiyyya, a Shiite seminary Mohamed Baher, said: "This historic visit of Pope Francis to Iraq has a special meaning for what the meetings will represent during this hinge time in Iraq's history, as we are building a country based on love and forgiveness, as well as establishing the bases of peaceful coexistence. The visit will have a good effect on Iraq and the region in general."

A Najaf resident, Salah Al-Fathli said, "Christians are a main components of the Iraqi people, and we cannot ignore [their role] them during the journey and history of Iraq. The Pope chose Iraq among all the other countries to send a message that the land between the two rivers and Iraq are the cradle of all races and the religions."