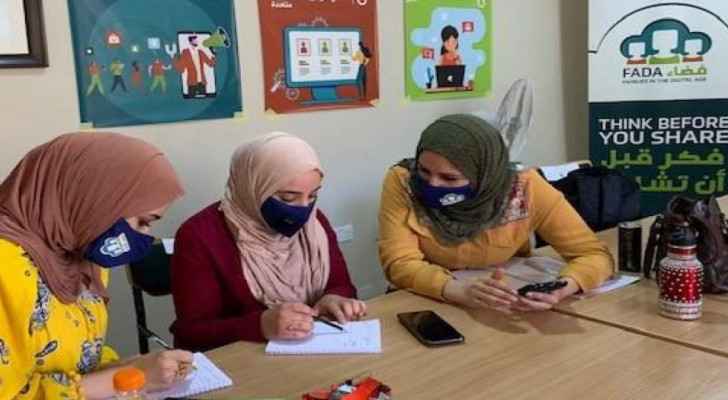 After completing a skill-building program in digital literacy, critical thinking and leadership, a group of women in Tafilah set out to raise awareness of cybercrimes and their effects on the community, and to provide initial support and mitigation measures to victims.

In only three months, they established a ‘Digital Legal Clinic’, trained over 1,000 people from Tafilah extended their reach across the country with a radio show. “We saw the frequency of cybercrimes and their impact on not only individuals, but their families and communities as a whole,” says Shorouq Al Hamaideh, one of the four initiative leaders. “We had to do something about it.”

Her Royal Highness Princess Basma bint Talal called in during one episode last week, emphasising the importance of the initiative in raising awareness about cybercrimes and their impact on local communities, and “equipping young people, who are especially vulnerable to the sometimes negative effects of the internet, with the tools they need to protect themselves.”

The ‘Digital Legal Clinic’, incubated in the Jordanian Hashemite Fund for Human Development (JOHUD) community development centre in Tafilah, is one of five community initiatives currently being run by women leaders under the Families in the Digital Age (FADA) program, implemented by global development and education organization, IREX (www.irex.org), in partnership with the Government of Canada.

“The digital gender divide is one of the starkest manifestations of inequality, threatening peace and development globally,” says Canada’s Ambassador to Jordan Ms Donica Pottie. “Not only do women and girls have less access to the internet and opportunities to develop digital skills, they are also disproportionately targeted and attacked online.”

Online censorship, digital attacks, harassment, and reputational attacks raise the risk of other forms of gender-based violence in the physical world, the Ambassador added.

The methodology used in the FADA program helps people consume and process information more critically, engage with information more responsibly, and contribute to stopping the spread of hate speech, harmful narratives, and other types of misinformation. IREX’s flagship approach to media and information literacy is called Learn to Discern, or L2D for short.

Started in 2018, the FADA program has built a cadre of experienced women facilitators, who have then provided training to other women in their communities in essential leadership and engagement skills, including digital literacy and online safety, and L2D. Over the past three years, FADA has trained over 60 facilitators in 10 governorates, who in turn have trained over 4,000 women.

These trainings increased support to women in their role as powerful, positive influencers of youth in their families and communities. In addition to the Tafileh ‘Digital Legal Clinic’, four other community initiatives are being implemented by FADA participants to advance digital citizenship, counter misinformation, and fight online abuse and cybercrimes, especially against women and youth.

In Irbid, the ‘Teach Me’ initiative teaches women how to use essential online platforms and set up e-wallets, an important resource in these COVID-19 times, when many are using online platforms for the first time. Offered by the Charitable Nashmeyat Irbid Association, the training helps navigate through official platforms to carry out day-to-day needs securely and safely.

The ‘This is Me’ social campaign, launched in Jerash, started from the realization that the misuse of pictures and photo editing was having not only psychosocial, but also physical impacts on young people, especially girls. Women leaders teamed up with the Jordan Society for Human Development in Jerash to provide training on how to detect altered and misleading photographs, and sessions led by psychosocial experts to highlight the ways in which photographs can be used to incite hate speech, and how this affects youth.

In Salt, the ‘Film Club’, launched in partnership with the Musa Al Saket Development Organisation, equips youth with media literacy and media production training to script, film and edit their own videos, highlighting issues such as online bullying, hate speech, and stereotyping. As part of this initiative, and for the media literacy tips to reach a younger audience, the team are working on creating a series of short animations videos. The cartoon will explore concepts of media literacy and digital safety using the theme of space, inspired by the program’s ‘FADA’ acronym, which in Arabic means ‘space.’

Lastly, the ‘Let’s Protect Them’ initiative was set up by two women leaders in Jerash and Tafileh, with the aim of teaching both caregivers and children the dangers of excessive use and misuse of the internet. The initiative provides online workshops with a range of guests including teachers, schoolchildren, professional gamers and psychosocial experts addressing questions and topics suggested by community members around healthy internet and media habits for children.

PSD arrests father for abusing his children in Jerash

PSD arrests father for abusing his children in ....

PSD arrests father for abusing his children in ....

PSD arrests father for abusing his ....