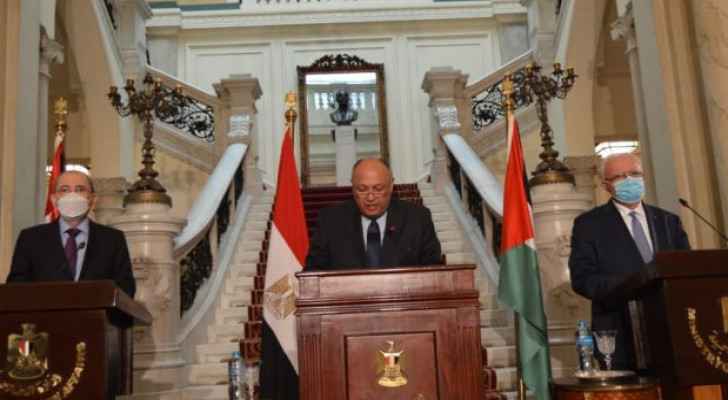 The foreign ministers of Egypt, Jordan and Palestine affirmed during a consultative meeting in Cairo Wednesday the continuation of tripartite coordination aimed at reviving the peace process in the Middle East.

Ahmed Hafez, a spokesman for the Egyptian Foreign Ministry said that the three ministers praised “the sincere desire to advance the relations between Egypt, Jordan and Palestine in various fields... especially the Palestinian issue."

The Egyptian Foreign Minister Sameh Shoukry and his Jordanian counterpart Ayman Safadi and Palestinian Riyad Al-Maliki stressed the importance of building on the momentum witnessed in recent months aimed at moving the peace process forward.

They praised the outcomes of the last meeting of the League of Arab States Council at the ministerial level, and expressed their aspiration for the effective engagement of the concerned international parties in the peace process file.

The ministers agreed on the importance of continuing to work in the months to come in order to create an environment conducive to serious and constructive negotiations between the Palestinian parties and the Israeli Occupation with the aim of ending the current stalemate, and seeking to reach a comprehensive, just and lasting peace that would guarantee the establishment of an independent and viable Palestinian state on the borders of June 4, 1967 with a capital of East Jerusalem.