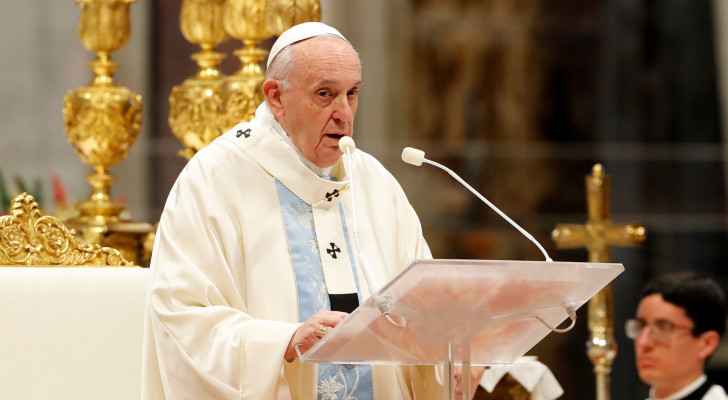 Pope Francis arrives in Iraq Friday for his first ever papal visit to this country, with the aim of encouraging Christians with strong roots in the country, and strengthening his contact with Muslims.

Among the most prominent stops of the Pope's visit is a meeting with the supreme Shiite cleric, Grand Ayatollah Ali al-Sistani, in Najaf.

The unprecedented visit comes at a critical time for Iraq, which is witnessing renewed violence with rocket launches and anti-government protests, amid a second wave of infections with the Coronavirus.

With his visit, the Pope realizes a dream that had always entertained the former Pope John Paul II.

Official sources revealed to Agence France-Presse on Sunday that the Vatican ambassador in Baghdad, Monsignor Metia Lescovar, had contracted the coronavirus, but it will not affect Pope Francis' visit Friday.

Years of violence and persecution have reduced the number of Christians in Iraq, who are among the oldest Christian groups in the world, from 1.5 million in 2003 to only 400,000 today.

In his first visit abroad since the outbreak of the pandemic, Pope Francis, 84, intends to send a message of solidarity not only to Christians but to all of Iraq’s 40 million people, with a program full of stations across the country.

From the main streets of Baghdad to the Shiite city of Najaf, banners have already been raised bearing his pictures, accompanied by expressions welcoming his coming.

From the southern city of Ur to the devastated Christian towns in the north, roads are being paved and churches are being rehabilitated in remote areas that have never seen a visitor so important before.

"The message of the Pope is that the Church stands on the side of those who suffer," Najib Mikhail, Archbishop of the Diocese of Mosul and Akre, told the Chaldeans, told AFP.

"He will say strong words to Iraq, where crimes against humanity have been committed," Michael said.

Iraqi Christians constitute one of the world's oldest and most diverse Christian groups, with Chaldeans, Armenians, Orthodox, Protestants and other sects.

In 2003, when the US-led invasion toppled Saddam Hussein, Christians made up about six percent of Iraq's 25 million people.

William Warda, one of the founders of the Hammurabi Human Rights Organization, said that with the increase in the population and the migration of minorities to escape sectarian violence, the percentage of Christians has decreased to only one percent.

Most of them are concentrated in Nineveh Governorate in northern Iraq, where many of them still speak Aramaic, the language of Christ.

In 2014, Daesh militants took control of Nineveh, invaded Christian towns, and gave their residents a choice between converting to Islam or dying.

At the time, Pope Francis supported the use of force to stop the spread of Daesh and studied the possibility of traveling to northern Iraq to stand with the Christian minority.

That trip did not materialize, but the Pope continued to closely follow the situation in Iraq, condemning the killing of unarmed protesters during a large-scale anti-government movement that erupted in 2019.

-Pope John Paul II had planned to visit Iraq in 2000, but Saddam Hussein abruptly canceled the trip. After that, his successor, Pope Benedict XVI, did not take any initiative in the direction of Baghdad.

Former Pope Benedict XVI, who has lived in a monastery in the Vatican since his resignation, said that this visit is "very important" but "also dangerous for security reasons and because of the outbreak of the coronavirus."

Shortly after the election of Pope Francis in 2013, Father Louis Sacco, who was later appointed by the Pope as Cardinal and President of the Chaldean Catholic Church, urged him to visit Iraq. Sacco is now the main organizer of the visit.

In 2019, Iraqi President Barham Salih issued a formal invitation, hoping that the visit would help Iraq "recover" after years of violence.

However, with the outbreak of the global COVID-19 pandemic, the Pope canceled all his foreign trips as of June 2020.

The Pope will arrive in Baghdad on Friday morning, with his security team and a group of 75 international journalists who have all received the vaccine like the Pope.

Despite the pandemic, the Pope intends to hold masses in Baghdad and Erbil, the capital of the Kurdistan region, and the ancient city of Ur, the birthplace of the Prophet Abraham.

Currently, about 4,000 new cases are recorded in Iraq per day, and the authorities imposed a night curfew and a complete closure over the weekend, which will be extended to cover the entire period of the visit.

Social distancing will be imposed during all masses, and those wishing to attend must register several weeks in advance to obtain tickets.

Pope Francis is a strong supporter of interfaith dialogue and has visited many Muslim-majority countries, including Bangladesh in 2017, Turkey in 2018, Morocco and the United Arab Emirates in 2019.

In Abu Dhabi, the Imam of Al-Azhar, Sheikh Ahmed Al-Tayeb, the great Sunni authority, met to sign a document that encourages further dialogue between Christians and Muslims.

Pope Francis hopes that his trip to Iraq will open a similar door with the Shiite Muslims who number about 200 million around the world and make up the majority of the population of Iraq.

As part of this effort, he will meet Grand Ayatollah Ali al-Sistani at his modest home in Najaf. Sacco told AFP in January that the Pope hoped Sistani would endorse the "Abu Dhabi" message signed by al-Tayyib, but religious sources in Najaf strongly denied that Sistani had signed any document.

Nevertheless, the meeting will be one of the highlights of this extraordinary journey.

"It is a historic visit ... We are talking about the leader of a religious sect followed by 20 percent of the world's population," said Najaf Governor Louay Al-Yasiri.

"His visit means a lot, and the visit of His Holiness to the Grand Ayatollah Ali al-Sistani will have a great impact," he told AFP.