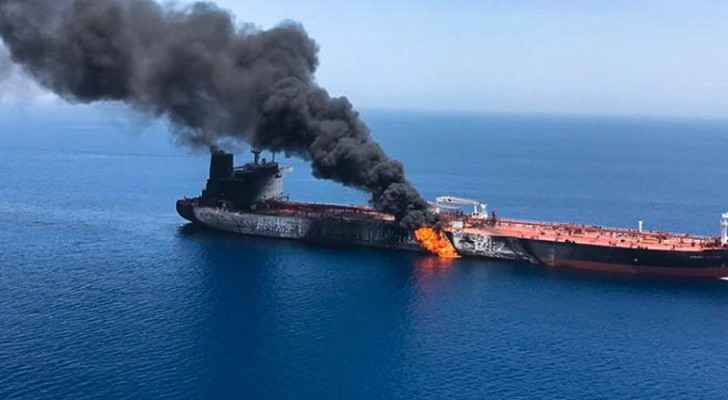 Israeli Occupation Prime Minister Benjamin Netanyahu warned Monday that his country would "strike" Iran, accusing the Islamic Republic of causing an explosion on an Israeli Occupation ship last week in the Gulf of Oman.

"It is clear that this is an Iranian act," Netanyahu said. "Iran is the biggest enemy of Israel, and we will strike it throughout the region (...)."

The Israeli Occupation "MV Helios Ray" car cargo ship was apparently heading from Dammam, Saudi Arabia, to Singapore when it exploded Thursday in the northwestern Gulf of Oman, according to the London-based Dryad Global Group, which deals with maritime security.

The Gulf of Oman is located between Iran and the Sultanate of Oman at the exit of the strategic Strait of Hormuz, through which a large part of the world's oil passes and ships belonging to the US-led coalition roam its waters.

"The most important thing is that Iran will not be able to acquire nuclear weapons, with or without an agreement. This is what I told my friend (US President Joe) Biden," added Netanyahu, who is campaigning for the legislative elections scheduled for March 23.

On Saturday, Israeli Occupation Defense Minister Benny Gantz said that Iran may be responsible for the explosion of the "MV Helios Ray" cargo ship, as part of increasing pressure to renegotiate the agreement on its nuclear program to improve its relations with Washington.

Also read: Explosion occurs on ship in Gulf of Oman